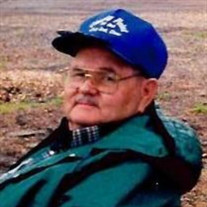 John William Denson was born November 29, 1932 in Labette County, Kansas. He was the second son of Thomas William and Bessie Morrison Denson. The family lived on a farm on the outside of Parsons Kansas, later his dad became a Divisional Lineman for the M-K-T (Katy) Railroad. The family moved to several locations the last being Osage and Cleveland, Oklahoma. John played on the Osage basketball team and graduated high school in 1951. He served in the Korean War, in the United States Army from 1951 to 1953. He was listed in communications which put him in the middle of North Korea and South Korea. During that time, he was awarded four medals. The Medal of Korean Service, United Nations, National Defense Service, and Medal of Good Conduct. He had then earned the rank of Corporal in 1953. After returning from Korea, he worked for Nelson Electric Company which later became O-Z Gedney. He worked there for 40 years, retiring as shop foreman for the company. John was proficient in sign language and was able to communicate with his deaf coworkers who also became lifetime friends down the road. In September 1956, he married Evelyn Marie Lovelady. She is the mother to their two daughters Debra and Cathy. Evelyn passed away in December of 1977 at the age of 41. In 1978, he married Betty Lou Britton who lived in Mound Valley, Kansas at the time. John made his home in Tulsa, Oklahoma. He was talented in playing the guitar, his favorite music was by Jimmie Rodgers. John was talented in playing the guitar, and his favorite music was by Jimmie Rodgers. His favorite hobbies were making fishing lures and wrapping fishing rods in bright beautiful colors. He was an avid hunter and fisherman and was happiest in the outdoors. In fact, he was also a member of the Nelson Electric Bass Club. He organized and contributed his time to bass tournament in which he many times took first place. He was admired for his strategic fishing skills and in turn became part of a brotherhood of fishermen which would live on for years. Among many talents, he also loved whittling. He would draw his own sketches of wildlife which he would then carve out of blocks of wood. After his retirement from O-Z Gedney, he resided at home until he became ill. He recently resided at the Veterans Center in Claremore, OK where he departed this life on May 9, 2020 at the age of 87. He said he never hated anyone. Always be good to one another and they will be good to you. He is survived by his wife Betty Lou, daughters, Debra Little of Claremore, Oklahoma, Cathy Farmer and her husband Dwight of Tulsa, Oklahoma. Stepson Ronnie Britton and wife Donna of Cherryvale, Kansas. Sisters, Juanita Hatcliff and husband Marlin of Kansas City, Kansas, Mary Dyke of Dennis, Kansas, and Betty Racy of Parsons, Kansas. Sisters-in-Law Becky Denson of Broken Arrow, Oklahoma, and Mary Lou Denson of Brawley, California. He is preceded in death by his parents, Tom and Bessie Denson, his first wife Evelyn, brothers Glenn and Tommy, son-in-law Daniel Little, brothers-in-law Clyde Dyke and Norman Racy, and stepson Ricky Britton, all of whom who will be there to welcome him to his eternal home. Funeral services will be held at 2:00 P.M., Saturday, May 16, 2020 at the Carson-Wall Funeral Home with Pastor Paul Cook officiating. Burial will be in Pleasant Hill Cemetery. Friends may call at their convenience after 9:00 A.M., Friday.

John William Denson was born November 29, 1932 in Labette County, Kansas. He was the second son of Thomas William and Bessie Morrison Denson. The family lived on a farm on the outside of Parsons Kansas, later his dad became a Divisional Lineman... View Obituary & Service Information

The family of John William Denson created this Life Tributes page to make it easy to share your memories.

Send flowers to the Denson family.