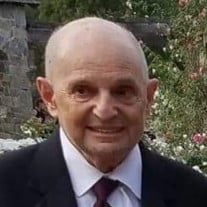 John Albert Gessner was born on September 15, 1938 in Boston, Massachusetts to Albert John Gessner and Beatrice (Shea) Gessner. He died on Tuesday, March 30, 2021 at his home in Skiatook, Oklahoma at the age of 82 years. John was raised and educated in Roxbury, Massachusetts and graduated with the Roxbury Memorial High School Class of 1956. He then enlisted and served his country honorably in the United States National Guard. John was married in Roxbury, Massachusetts on May 8, 1960 to Dorothy Gertrude (Libby) Gessner. He spent most of his working life as a supervisor with Linde Cryogenics in Tulsa, Oklahoma. John was a longtime faithful member of Saint James Church in South Grafton, Massachusetts. In his spare time, John enjoyed a variety of past times such as skiing, roller skating, playing cards, kit car building, riding motorcycles, loving dogs and cats, and working on home projects for his wife. More than anything he loved his friends and his family. Our memories of John will always be a gentle man with a smile and a story and someone with the biggest heart. At barely 5 feet tall, he was a man that everyone looked up to. Those he leaves behind who hold many cherished memories include: 2 Children; Catherine Gessner DebBrown Brighton and husband Chris 11 Grandchildren; Brian, Nicole, John, Joseph, Ben, Kira, Percy, Willow, Josiah, Marcella, and Tia 3 Great Grandchildren; Charlotte, Hadley, and McKenna Sister; Linda St. Clair and husband Jim He was preceded in death by his parents, Albert and Beatrice, daughter, Joan, son, James, brother, Eugene, and his wife, Dorothy. In lieu of flowers, the family would like donations to be made to the John Albert Gessner Memorial Fund through St. Jude Children’s Research Hospital, 501 St. Jude Place, Memphis, TN 38105.

John Albert Gessner was born on September 15, 1938 in Boston, Massachusetts to Albert John Gessner and Beatrice (Shea) Gessner. He died on Tuesday, March 30, 2021 at his home in Skiatook, Oklahoma at the age of 82 years. John was raised and... View Obituary & Service Information

The family of John Albert Gessner created this Life Tributes page to make it easy to share your memories.

Send flowers to the Gessner family.