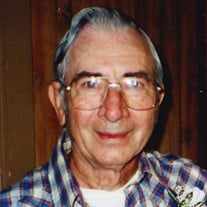 John Raymond “Hoot” Gibson was born on February 23, 1925 in Salina, Oklahoma to John Alvin Gibson and Mary Gladdine (Connor) Gibson. He passed from this life on Wednesday, June 2, 2021 at his home in Collinsville, Oklahoma at the age of 96 years. Hoot was raised and educated in Tulsa, Oklahoma and attended Webster High School. He was drafted into the United States Army during his Senior year where he served his country honorably and stormed the beaches of Normandy on D-Day in World War II. After returning home from the war, Hoot earned his diploma and graduated with the Webster High School Class of 1945. Hoot was married on December 25, 1946 in Drumright, Oklahoma to Georgia Inez (DeBoard) Gibson. He spent most of his working life as an Aircraft Mechanic with North American, Rockwell and Boeing Airlines in Tulsa for over 20 years. Hoot was a 32nd Degree Mason with the Delta Lodge in Tulsa. He enjoyed a variety of past times such as fly fishing, camping, and gardening. Those he leaves behind who hold many cherished memories include: His Wife of over 74 years; Georgia Gibson 2 Sons; John Gibson James Gibson Daughter; Darla Grimes 7 Grandchildren; Larry, James, Lynn, Adam, Darsea, Chris, and Brandie 15 Great Grandchildren; He was preceded in death by his parents, John and Mary, brother, Bobby, sister, Betty, and daughter, Linda. Visitation will be held 4:00 p.m. to 8:00 p.m. on Wednesday, June 9, 2021 at Mowery Funeral Service. Graveside service will be 1:00 p.m. on Thursday, June 10, 2021 at Fort Gibson National Cemetery in Fort Gibson, Oklahoma. Arrangements and service were entrusted to Mowery Funeral Service in Owasso.

John Raymond &#8220;Hoot&#8221; Gibson was born on February 23, 1925 in Salina, Oklahoma to John Alvin Gibson and Mary Gladdine (Connor) Gibson. He passed from this life on Wednesday, June 2, 2021 at his home in Collinsville, Oklahoma at the... View Obituary & Service Information

The family of John Raymond "Hoot" Gibson created this Life Tributes page to make it easy to share your memories.

Send flowers to the Gibson family.