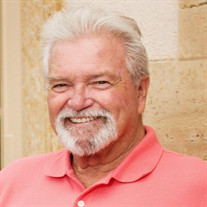 John Paul Guilfoyle was born December 8, 1948, in Okmulgee, Oklahoma, to Patrick Guilfoyle and Ora Belle (Porche) Guilfoyle. He died on August 28, 2021, at the age of 72. John was raised in Greely, Kansas where he attended St. John’s Catholic school and graduated from Greely high school in 1967. After high school he was drafted into the Marine Corps. John married Susie Guilfoyle (Miller) on October 23, 1976 at St. John Catholic Church in Greeley, Kansas. They were married for 44 years until Susie’s passing in 2020. John and Susie made their way to Oklahoma in the late 70’s and lived in Owasso, where they lived until 1994. They built “the place” in Oologah, where they raised their three children, Skylar, Sarah and Shelby. John spent most of his working life as a truck driver, working for Fed Ex Freight, he retired in 2014. One of John’s biggest joys in life was fishing, he was part of several fishing clubs and frequented bass tournaments when his children were younger. Weekends were spent in the travel trailer camping with his family on different lakes in Oklahoma. Later in life John preferred to stay on the farm and loved when his kids and grandkids would come to visit and enjoy the land. When John chose to travel he would make trips to “the cabin” where he would spend the weekends with his brothers playing cards, telling jokes and drinking beer. Those he leaves behind who hold many cherished (and funny) memories include his 3 children: Son, Skylar Guilfoyle and Pamela, of Owasso; Sarah Brown and husband Brandon of Owasso, and Shelby Reading and husband Dakota, of Oologah. 4 grandsons: Joshua, Jaxon, Cameron and Cooper, and his first granddaughter who will arrive in a few weeks. His mother, Ora Belle Guilfoyle, of Ft. Scott, KS; siblings Tom Guilfoyle and Wife Vickie of Parker, KS; David Guilfoyle and wife Cheryl of Grove, OK; Ronald Guilfoyle and wife Donna, Bill Guilfoyle and wife Gina of Lawson, Mo; Judy Peterson and Husband Ken of Oro Valley, AZ; Rick Guilfoyle and wife Kim of Broken Arrow, Ok; Laura Krom and Husband Dennis of Ft. Scott, Ks. John was preceded in death by his wife Susie Guilfoyle, his father, Patrick Guilfoyle, and brothers Joe Guilfoyle and Mike Guilfoyle.

John Paul Guilfoyle was born December 8, 1948, in Okmulgee, Oklahoma, to Patrick Guilfoyle and Ora Belle (Porche) Guilfoyle. He died on August 28, 2021, at the age of 72. John was raised in Greely, Kansas where he attended St. John&#8217;s... View Obituary & Service Information

The family of John Paul Guilfoyle created this Life Tributes page to make it easy to share your memories.

Send flowers to the Guilfoyle family.