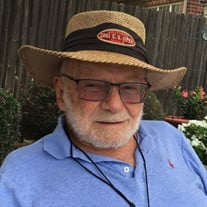 John Leland Hudson “Doc” a devoted husband, father, grandpa and great grandfather completed his journey to his heavenly home on Friday August 13, 2021. He passed away at Hillcrest Hospital in Tulsa, OK. John was 90 years old. Born February 7, 1931 in Perryville, AR to Alpha and Homer Hudson. He graduated from Charleston, AR in 1948. Then attended the University of Arkansas and graduated in 1951. He continued to Medical School at the University of AR and graduated in 1955. John was united in marriage to the love of his life Billie Jean in 1955. Together this union brought forth four children. Dr. John Hudson served his residency at St. Francis Hospital in Wichita, KS. John served in The United States Navy upon the US Taconic which landed in Beirut, Lebanon. After leaving the Navy they lived in several states including MS, AR, KS. In 1965 they moved to Barnsdall, OK where John opened his first practice. They lived there for about five years before moving to Hominy, OK where he served this community for over sixteen years where he was known as “Doc Hudson”. He and Jean moved to Fayetteville, AR in 1987 where he worked at the VA Hospital until retiring in 1999. They then moved to Owasso, OK. Even after retiring “Doc” volunteered at the Dream Center in north Tulsa for several years. He loved spending time with his family, his church family and close friends. John never met a pie or a chocolate cake he didn’t like. Those surviving include his oldest son, Mike Hudson, and wife Deanna of Broken Arrow, OK , daughter Dianne Shaw and husband David of Skiatook, OK. Son Ricky Hudson and wife Laura of Tulsa, OK; 12 grandchildren and 13 great grandchildren. Preceding in death; His cherished wife Billie Jean, daughter Rebecca Hashbarger, sister Billie Lorenz and parents John Homer and Alpha Hudson. Memorial Service will be held Friday, August 27, 2021 at 10:30 a.m. at Central Baptist Church located at 9001 North 145th East Avenue, Owasso, Oklahoma. In lieu of flowers, the family requests donations be made to the Central Baptist Church Benevolence Fund, 9001 North 145th East Avenue, Owasso, Oklahoma, 74055. Arrangements and services were entrusted to Mowery Funeral Service of Owasso. www.moweryfs.com

The family of John Leland "Doc" Hudson created this Life Tributes page to make it easy to share your memories.

Send flowers to the Hudson family.