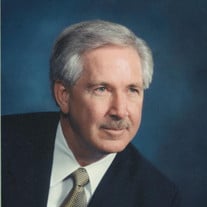 John Clark Mayes was born April 6, 1945, in Okmulgee, Oklahoma, to James Kent Mayes, Sr., and Elsie Mae Pearson Mayes. He died Friday, December 24, 2021, in Owasso, Oklahoma, at the age of 76 years. John was reared and educated in Okmulgee where he was an outstanding athlete on the Bulldog football team. He graduated with the Okmulgee High School Class of 1963. He continued his education and football career at Northeastern State University in Tahlequah, Oklahoma, where he earned his bachelor’s degree in accounting. He was a veteran of the armed forces having served his country honorably with the United States Army. John was married to the love of his life, Joan Cox, on March 24, 1979, in Muskogee, Oklahoma. They had made their home in Owasso, Oklahoma, since 1986. John was a man strong in his faith and attended First Baptist Church in Owasso. He enjoyed a variety of pastimes, especially being outdoors spending time fishing, golfing, or playing tennis. Those he leaves behind who hold many cherished memories include: His wife; Joan, of the home Children; John C. Mayes, Jr., of Tulsa, Oklahoma Stephanie Kidd, of Owasso, Oklahoma John Carlyon, of Owasso, Oklahoma Grandchildren; Caitlin Kidd, of Tulsa, Oklahoma Caleb Kidd, of Broken Arrow, Oklahoma Callie Kidd, of Stillwater, Oklahoma Melanie Smith, of Owasso, Oklahoma Sister; Linda Eley, of Long Beach, California Niece; Dr. Becky Farley, of Tucson, Arizona Nephew; Kent Mayes, of Checotah, Oklahoma He was preceded in death by his parents, two sisters, Judy Howard and Shirley Farley, and one brother, James Kent Mayes, Jr. Visitation will be held from 4:00 p.m. to 8:00 p.m. Monday, January 3, 2022, at Mowery Funeral Service in Owasso. Funeral service will be held 1:30 p.m. Friday, January 7, 2022, at First Baptist Church in Owasso with Pastor Chris Wall officiating and memories by David Penuel. The family requests memorial contributions be made in John’s memory to The Mission-FBCO, P.O. Box 1020, Owasso, Oklahoma, 74055, or The Owasso Baptist Children’s Home, 12700 Est 76th Street North, Owasso, Oklahoma, 74055. Arrangements and services were entrusted to Mowery Funeral Service of Owasso. www.moweryfs.com

The family of John Clark Mayes created this Life Tributes page to make it easy to share your memories.

Send flowers to the Mayes family.