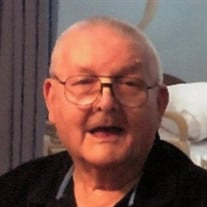 John Baptiste Nimal II was born January 26, 1936, in McDonald, Pennsylvania, to Paul J. and Dorothy Mae Lamb Nimal. He died Saturday, February 22, 2020, in Tulsa, Oklahoma, at the age of 84 years. John completed his secondary education in McDonald before starting a distinguished career with the United States Air Force. He served his country honorably for over 22 years as an aircraft maintenance supervisor. He was married May 12, 1945, in McDonald, Pennsylvania, to Mary Catherine McFalls. They had made their home in Owasso, Oklahoma, since November of 1972. He spent much of his working life as an aircraft mechanic with Aircraft Accessories of Oklahoma. John enjoyed a variety of pastimes, but he especially enjoyed spending time outdoors hunting and fishing. Those he leaves behind who hold many cherished memories include: Son; Paul Nimal, of Owasso Daughter in law; Robin Nimal, of Owasso Grandchildren; Johnny Nimal and wife Julie, of Keefton, Oklahoma Ryan Nimal, of Tulsa, Oklahoma Anthony Nimal and wife Sam, of Owasso, Oklahoma Julia Howard and husband Gavin, of Houston, Texas Nine great grandchildren He was preceded in death by his parents, wife, Mary Nimal, son, John Nimal, and two brothers, Chuck Nimal, and Paul Nimal. Visitation will be held from 6:00 p.m. to 8:00 p.m. Wednesday, February 26, 2020, at Mowery Funeral Service in Owasso, Oklahoma. Funeral service will be held 10:00 a.m. Thursday, February 27, 2020, at the Mowery Funeral Service Chapel with Pastor Leonard Pirtle officiating. Committal service and interment will follow at the Fort Gibson National Cemetery in Fort Gibson, Oklahoma. Arrangements and services were entrusted to Mowery Funeral Service of Owasso. www.moweryfs.com

The family of John Baptiste Nimal II created this Life Tributes page to make it easy to share your memories.

Send flowers to the Nimal family.