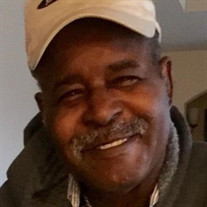 John Henry Parker, Sr., was born January 13, 1952, in Itta Bena, Mississippi, to Elijah and Lucille Williams Parker. He died Monday, September 16, 2019, in Tulsa, Oklahoma, at the age of 67 years. John completed his secondary education at Thomas Jefferson High School in Los Angeles, California, graduating with the Class of 1970. He was a veteran of the armed forces having served his country honorably with the United States Marine Corp. He continued his education attending Patrick Henry Community College in Martinsville, Virginia. John was married March 17, 1979, in Los Angeles, California, to Peggy Martin. They had made their home in Owasso, Oklahoma, since 2008. John spent most of his working life as a machinist. He had been a faithful member of First Baptist Church of Owasso where he had served as a greeter and worked with Mission Owasso. He enjoyed a variety of pastimes including playing dominoes with his friends, but he particularly enjoyed spending time out on the ponds fishing. He was especially fond of his role of Grandpa. Those he leaves behind hold many cherished memories include: His wife; Peggy, of the home Daughter; Keisha Bailey and husband Andre, of Long Beach, California Son; John Henry Parker, Jr. and wife Kellye, of Skiatook, Oklahoma Stepdaughter; Conita Reed, of Santa Clarita, California Grandchildren; Levi, Aniy, Judith, Kadence, Kennedy, John Parker III, Ashley, and Ashton Four sisters; Barbara, Margie, JoAnn, Faye He was preceded in death by his parents, two sisters, and one brother. Visitation will be held from 4:00 p.m. to 8:00 p.m. Thursday, September 19, 2019, at Mowery Funeral Service in Owasso. Funeral service will be held 1:30 p.m., Friday, September 20, 2019, at the Mowery Funeral Service Chapel in Owasso with Pastor Chris Wall officiating. Private family disposition will be held at a later date. The family requests memorial contributions be made to The Mission FBCO, 11241 North Garnett Road, Owasso, Oklahoma, 74055. Arrangements and services were entrusted to Mowery Funeral Service of Owasso. www.moweryfs.com

The family of John Henry Parker Sr. created this Life Tributes page to make it easy to share your memories.

Send flowers to the Parker family.