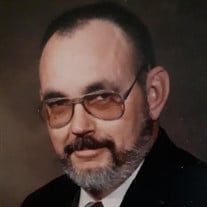 John Raymond Shore was born June 22, 1940, in Raymore, Missouri, to Jack Leroy and Winnifred Nadine Shipley Shore. He died Tuesday, October 6, 2020, in Owasso, Oklahoma, at the age of 80 years. After completion of high school, John served honorably with the United States Air Force. He was married September 6, 1968, in Tulsa, Oklahoma, to Olene Hodge. He spent most of his working life as a structural mechanic with American Airlines. John enjoyed a variety of pastimes including farming and working in his garden. He loved watching the old Westerns, especially John Wayne movies and Gunsmoke. He particularly enjoyed his role of “Pappy” to his grandchildren and great grandchildren. Those he leaves behind who hold many cherished memories include: His wife; Olene, of the home Son and daughter-in-law; John and Cindy Shore, of Owasso, Oklahoma Grandchildren; Sarah Shore and J.D. Shore, and his wife Josie Great grandchildren; Stella Shore, Cash Burgan, Elenore Jean Gebauer, and a grandson on the way in January, Colson Ray Shore Two sisters; Betty Shore Vicki Mascorro and husband Mark, all of Houston, Texas He was preceded in death by his parents. Visitation will be held from 4:00 p.m. to 8:00 p.m. Monday, October 12, 2020, at Mowery Funeral Service in Owasso. Funeral service will be held 10:00 a.m. Tuesday, October 13, 2020, at the Mowery Funeral Service Chapel with Pastor Leonard Pirtle officiating. Graveside service will be held 2:00 p.m. that afternoon and the Westlawn Cemetery in Henryetta, Oklahoma. The family requests memorial contributions be made to the American Heart Association, 2227 East Skelly Drive, Tulsa, Oklahoma, 74105. Arrangements and services were entrusted to Mowery Funeral Service of Owasso. www.moweryfs.com

The family of John Raymond Shore created this Life Tributes page to make it easy to share your memories.

Send flowers to the Shore family.