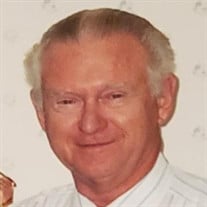 Johnny Roy Buller was born June 29, 1930, in Enid, Oklahoma, to John P. and Katherina Remple Buller. He died Sunday, December 13, 2020, in Owasso, Oklahoma, at the age of 90 years. Johnny was reared and educated in Garfield County, Oklahoma, and was a graduate of Hillsdale High School, and also attended Corn Bible Academy. He continued his education at Rio Grande Bible Institute in Edinburg, Texas, then earned his Bachelor’s in Theology at Pacific Bible College in Fresno, California. Johnny married his high school sweetheart, Dorothy Wedel, on June 3, 1951, in Collinsville, Oklahoma. He spent most of his working life as an automotive parts salesman with Four States Chrysler in Tulsa, then with Bradley Oldsmobile. Johnny was a man strong in his faith and was a longtime faithful member of Discovery Church, formerly Westport Mennonite Brethren Church, in Collinsville, Oklahoma. He was very active in his church serving as a deacon, the church board, and as a Sunday School teacher to the age of 82. He enjoyed a variety of pastimes including working on cars with his sons. He also enjoyed his collection of mini cars and researching family genealogy. He was a fervent student of studying God’s Word. Those he leaves behind who hold many cherished memories include: His wife; Dorothy, of the home Children; James Buller and wife Rita, of Evans, Colorado Allen Buller and wife Vicki, of Portland, Oregon Ernest Buller and wife Barb, of Berlin, Ohio Jonathan Buller, of Edmond, Oklahoma Linda Winkler and husband Darwin, of Garland, Texas 16 grandchildren 21 great grandchildren Sisters; Rosella, Hanna, Sarah, and Elfrieda Brothers; Harold and Alfred He was preceded in death by his parents, sister, Marie, and daughter-in-law, LuAnne Visitation will be held from 4:00 p.m. to 8:00 p.m. Friday December 18, 2020, at Mowery Funeral Service in Owasso. Funeral service will be held 10:00 a.m. Saturday, December 19, 2020, at Discovery Church in Collinsville, Oklahoma, with Pastor Mike Frantz officiating. Serving as casket bearers will be Marty Buller, Mark Buller, Michael, Buller, Nathan Buller, Alfred Buller, and Harold Buller. Committal service and interment will follow at Parkside Mennonite Brethren Cemetery in Inola, Oklahoma. The family requests memorial contributions be made to Project Hope Worldwide, P.O. Box 845, Owasso, Oklahoma, 74055. Arrangements and services were entrusted to Mowery Funeral Service of Owasso. www.moweryfs.com

The family of Johnny Roy Buller created this Life Tributes page to make it easy to share your memories.

Send flowers to the Buller family.