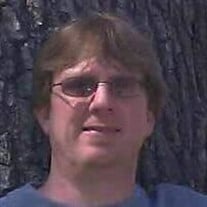 Leonard John Slauf, Jr. was born August 9, 1969, in Tulsa, Oklahoma, to Leonard John Slauf, Sr., and Joyce A. Crosby. He died Saturday, August 4, 2018, in Owasso, Oklahoma, at the age of 48 years. Johnny was reared and educated in Tulsa, Oklahoma, and completed his secondary education at East Central High School. He continued his education at Tulsa Technology Center. Johnny was married June 26, 1992, in Tulsa to Kim Silcox. They made their home in Tulsa before moving to Owasso in 2015. He spent most of his working life as a machinist with Pryor Machine and T.D. Williamson. He was a faithful member of A Glorious Church Fellowship in Collinsville, Oklahoma. Johnny enjoyed a variety of pastimes, especially disc golf, and was the inventor of the “Quic Stic”. Those he leaves behind who hold many cherished memories include: His wife; Kim, of the home Two daughters; Hannah Slauf and Elizabeth Slauf, both of Collinsville Two brothers; Tony Slauf and wife Theresa, of Broken Arrow, Oklahoma Mike Slauf and wife Chrystall, of Tulsa Mother; Joyce Crosby, of Tulsa Father-in-law and mother-in-law; Teresa and Waburn Silcox, of Collinsville Brother-in-law; Kevin Silcox, of Collinsville He was preceded in death by his father, L.J. Slauf Funeral service will be held 10:00 a.m. Thursday, August 9, 2018, at A Glorious Church Fellowship in Collinsville, Oklahoma. Final resting place will be at Osage Gardens in Skiatook, Oklahoma. Arrangements and services were entrusted to Mowery Funeral Service of Owasso.

The family of Johnny Slauf created this Life Tributes page to make it easy to share your memories.

Send flowers to the Slauf family.