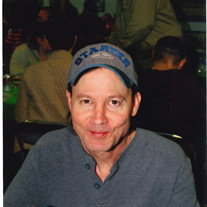 Joseph Patrick Bryan was born May 16, 1959, in Tulsa, Oklahoma, to Robert Dean Bryan and Mary Margaret (Livingston) Bryan. He left this life on Wednesday, March 16, 2022, in Owasso, Oklahoma, at the age of 62 years. Joe was raised in the Catholic faith, attended St. Pius Catholic Church, St. Henry’s Catholic Church, and various Catholic churches growing up. Joe completed his early education in Tulsa, Oklahoma, at Sam Houston Elementary School before the family moved to Owasso, where he completed his secondary education. Joe was active in baseball, football, and focused on wrestling predominantly after the move to Owasso. Joe was a graduate of the Owasso High School Class of 1977. He completed his training for electrical trade and joined the International Brotherhood of Electrical Workers (IBEW) Local #584 in January 1992. He traveled out of state as well as worked for multiple companies over the years. He also went into business with his dad, Robert D. Bryan, Sr., and opened Bryan Electric for a short period in Owasso, Oklahoma. He recently retired and was looking forward to a new routine, one we hoped would include fishing and enjoying time with his grandkids and a much-deserved enjoyment of life. Joe had a passion for animals and all beasts. There was not an animal growing up that he did not protect and care for (unless of course they were preying on his beasts). He had many cherished pets over the years, but the last pet he had was bird named Jose’. He was an avid horseman in his early years. Joe was more than handy. He was able to fix and repair almost anything. He was smart, quiet, and quite the crafty dude. Above all, he was a thinker. His heart was as beautiful and kind as his handsome appearance. He truly was one of a kind. Those who left behind heartbroken and will hold tight to each other and their many cherished memories include: His children; Kara Bryan Henry and husband Chris Laura Bryan Guy and husband Lewis Keely Jo Bryan, Nick Bryan, and Sean Bryan His grandchildren; Dakota Bryan, Kaylee Henry, Blayke Bryan Henry, Dez Guy, Brady Guy, Brewer Guy, and Brayson Guy Sister; Linda Bryan Large, husband Tom, and nephew, Dustin Large Joe was preceded in death by his beloved brother, Robby, and parents, Bob and Mary. There are no words to express the level of grief or how very much we all will miss Joe. Visitation will be held from 4:00 p.m. to 8:00 p.m. Tuesday, March 22, 2022, at Mowery Funeral Service in Owasso. Funeral service will be held 2:00 pm. Wednesday, March 23, 2022, at the Mowery Funeral Service Chapel in Owasso with Pastor John Carney officiating. Private family interment will be held at Memorial Park Cemetery in Tulsa, Oklahoma. Arrangements and services were entrusted to Mowery Funeral Service of Owasso. www.moweryfs.com

Joseph Patrick Bryan was born May 16, 1959, in Tulsa, Oklahoma, to Robert Dean Bryan and Mary Margaret (Livingston) Bryan. He left this life on Wednesday, March 16, 2022, in Owasso, Oklahoma, at the age of 62 years. Joe was raised in the... View Obituary & Service Information

The family of Joseph Patrick Bryan created this Life Tributes page to make it easy to share your memories.

Send flowers to the Bryan family.