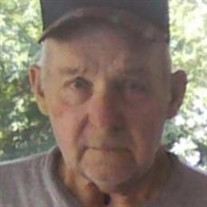 Joseph Wesley “Wes” Cooper was born on December 19, 1949, in Claremore, Oklahoma to Walter Elon Cooper and Dora “Emilie” (Hopkins) Cooper. He died on Saturday, June 20, 2020, in Collinsville, Oklahoma, at the age of 70 years. Wes attended school in Sequoyah, Oklahoma and after completing the 11th grade, he enlisted and served his country honorably in the United States Army. He spent most of his working life as a Machinist with Burgess Norton in Claremore for over 22 years. In his spare time Wes enjoyed a variety of past times such as reading, listening to music, watching cooking shows, westerns, and college football, fishing, and lawn mower repair. As his health began to decline, his favorite place to spend time became the casino. Those he leaves behind who hold many cherished memories include: 3 Children; Jim Cooper, of Oologah Pam Heape, of Collinsville Teresa Cooper, of Collinsville 3 Sisters; Barbara Carter, of Claremore Debrah Bell, of Claremore Erma Elliot, of Kearney, Missouri He was preceded in death by his parents, Walter and Emilie, brother, Esley, and sister, Carol. Graveside Service will be held at 10:00 a.m. on Thursday, July 9, 2020 at Sandridge Cemetery in Collinsville, Oklahoma. Arrangements and services were entrusted to Mowery Funeral Service.

The family of Joseph Wesley "Wes" Cooper created this Life Tributes page to make it easy to share your memories.

Send flowers to the Cooper family.