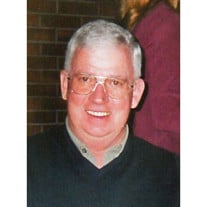 ' Joseph Harry Harris, Sr, known to most as â€œJoeâ€, passed from this life on Wednesday April 1, 2015, at the age of 66 years. Joe was born August 24, 1948, in Cortland, New York, the son of Harry A. and Goldie (Rice) Harris. He was raised and received his education in the Cortland and McGraw area. On January 18, 1967, Joe enlisted in the U.S. Army, honorably serving his country. He was discharged on January 17, 1973, with the rank of SP5. Joe and Julia B. Bearup were united in marriage on November 20, 1971, in St. Patrickâ€™s Church, Truxton, NY. Following his discharge, Joe worked as a heavy equipment operator in the construction business before moving to Owasso in 1998. He worked for the City of Owasso as a supervisor until retirement. Joe was a life member of the Owasso VFW Post #7180. He enjoyed NASCAR races, camping but mostly spending time with his family, especially his granddaughter. Those that survive include his wife â€“ Julia of the home; a son Joseph H. Harris, Jr, and wife Michelle of Live Oak, FL; his daughter Jill M. Brown and husband Steven of Owasso; one granddaughter Courtney M. Brown, three added grandchildren â€“ Tyler, Katelynn and Nicholas and Jax, a boy that called him Grandpa. Also surviving are four brothers Robert Hotaling and wife Pat of Solon, NY, Floyd Hotaling and wife Patty, also of Solon, Carroll Harris and wife Rosie of Owasso and Eugene Barker and wife Marilyn of California; two sisters Marian Towers and Darlene Genovese and her husband Patrick, both of Owasso; niece Peggy Halpern and husband Phillip and Nephew James M. Towers and wife Mary Jo, as well as other nieces, nephews, relatives and friends. Memorial services for Joe will be on Tuesday, April 7, 2015, at 2:00 p.m., in the Chapel of Mowery Funeral Service with Frank Brummett officiating. The family has requested that contributions be made to the Owasso VFW Post 7180, 7708 North 131st East Court, Owasso, OK 74055. Arrangements and services have been entrusted to Mowery Funeral Service of Owasso. www.moweryfs.com'

The family of Joseph H. Harris, Sr. Joe created this Life Tributes page to make it easy to share your memories.