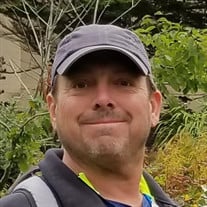 Joseph Arnold “Joe” Moberly was born October 23, 1963, in Longview, Washington, to Willard Sidney and Marjorie Sharon Searing Moberly. He died Tuesday, July 16, 2019, in Owasso, Oklahoma, at the age of 55 years after an extended illness. Joe completed his secondary education in Fairbanks, Alaska, and graduated with the Fairbanks High School Class of 1981. He was a veteran of the armed forces having served his country with United States Air Force. He was married December 30, 1983, in Fairbanks to Jeri Day. In 1986, they made the move to Tulsa, Oklahoma, where he attended Spartan School of Aeronautics. This allowed him an over 30-year career as a mechanic with American Airlines. In 1989, Joe and Jeri moved to Sperry before moving to Owasso in 2008. Joe enjoyed a variety of physical activities including back country camping and hiking. He was most passionate about running, completing his first marathon in Chicago in 2015. Those he leaves behind who hold many cherished memories include: His wife; Jeri, of the home Children; Joe Moberly, of Tulsa Paul Moberly, of Zebulon, North Carolina Bryan Moberly, of Broken Arrow, Oklahoma Grandson; Tristen Landers, of Coweta, Oklahoma Brother; Matt Moberly, of Fairbanks, Alaska Two sisters; Cathy Norum and husband Mark, of Fairbanks, Alaska Margery Moberly of Anchorage, Alaska Parents; Bill and Marj Moberly, of Fairbanks, Alaska Funeral services will be held 11:00 a.m. Tuesday, July 23, 2019, at the Mowery Funeral Service Chapel in Owasso, Oklahoma, with Pastor Leonard Pirtle officiating. The family requests memorial contributions be made to the Joe Moberly Runners Fund, c/o First Bank of Owasso, P.O. Box 1800, Owasso, Oklahoma, 74055. Arrangements and services were entrusted to Mowery Funeral Service of Owasso. www.moweryfs.com

The family of Joseph Arnold Moberly created this Life Tributes page to make it easy to share your memories.

Send flowers to the Moberly family.