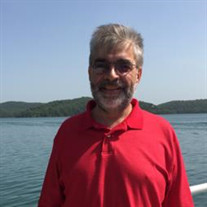 Joseph Alexander Purcell was born December 9, 1962, in El Paso, Texas, to Jack M. and Marian Mae Dittus Purcell. He died Wednesday, July 15, 2020, in Tulsa, Oklahoma, at the age of 57 years. Joe completed his secondary education in Tulsa and graduated with the Central High School Class of 1980. He was very musically talented and could play most any instrument. This led him to be active with the high school band and was selected as drum major. He continued his education at Tulsa Junior College where he earned his associate’s degree. He then attended Northeastern State University in Tahlequah, Oklahoma, where he earned his bachelor’s degree with a major in English with a minor in sociology. He attended Tulsa Tech where he received his security guard and handcuffing training. He also studied at Rhema Bible College in Broken Arrow, Oklahoma. Joe worked a paper route in his youth, then worked his way to shift manager at Casa Bonita. The last 20 years he worked as a security guard, most recently with Allied Universal Security. He enjoyed a variety of pastimes including reading, but especially spending time with his family whom he dearly loved. Those he leaves behind who hold many cherished memories include: His sister; Tobi Cahill Niece; Emma Cahill Nephews; Adam Cahill, Chris Cahill, and Van Cahill Mother; Marian Purcell And his two dogs, Snoopy and Betty He was preceded in death by his father, Jack M. Purcell, and grandparents, Joseph Purcell, Hazel Oyler, Clara Dittus, and Gottfried Dittus. Graveside service will be held 10:00 a.m. Tuesday, July 28, 2020, at Rest Haven Cemetery in Sperry, Oklahoma. The family requests memorial contributions be made in Joe’s name to Mowery Funeral Service, P.O. Box 53, Owasso, Oklahoma, 74055. Arrangements and services were entrusted to Mowery Funeral Service of Owasso. www.moweryfs.com

The family of Joseph Alexander Purcell created this Life Tributes page to make it easy to share your memories.

Send flowers to the Purcell family.