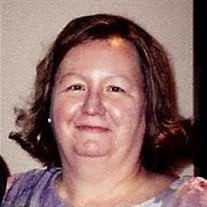 Judy Faye Tucker was born December 12, 1949, in Fort Smith, Arkansas, to Lloyd Joseph Clopton and Marcell Beshears Clopton. She died Friday, October 12, 2018, in Owasso, Oklahoma, at the age of 68 years. Judy completed her secondary education in Owasso and graduated with the Owasso High School Class of 1967. She continued her education attending Northeastern Oklahoma A & M in Miami, Oklahoma. She was married November 25, 1968, at her parents’ home in Owasso to Everett Tucker. She spent most of her working life as the food services manager with Owasso Public Schools. Judy enjoyed a variety of pastimes including reading and shopping for antiques with Everett. She cherished her role of Grandma to her grandchildren. Those she leaves behind who hold many dear memories include: Her husband of nearly 50 years; Everett, of the home Two sons; Paul Tucker and wife Tracy, of Owasso Jerry Tucker and wife Shelly, of Owasso Grandchildren; Kaitlyn, Jake, Emily, Brennan, and Jett Sister; Barbie Jo Schmidt and husband Ed, of Broken Arrow, OK Brother; Dan Clopton and wife Carol, of Locust Grove, OK As well as many other loving family members She was preceded in death by her parents, and sister, Cathy Sue Osborn Visitation will be held from 6:00 p.m. to 8:00 p.m. Monday October 15, 2018, at Mowery Funeral Service in Owasso. Funeral service will be held 2:00 p.m. Tuesday, October 16, 2018, at First Church in Owasso with Pastor Matt Thomason officiating. Serving as casket bearers will be Paul Tucker, Jerry Tucker, Jake Tucker, Jett Tucker, Brennan Doss, and Danny Clopton. Committal service and interment will follow at Graceland Memorial Park Cemetery in Owasso. The family requests memorial contributions be made in Judy’s memory to the National Fibromyalgia Association, 3857 Birch Street, Suite 312, Newport Beach, California, 92660, or at fmaware.org. Arrangements and services were entrusted to Mowery Funeral Service of Owasso. www.moweryfs.com

The family of Judy Faye Tucker created this Life Tributes page to make it easy to share your memories.

Send flowers to the Tucker family.