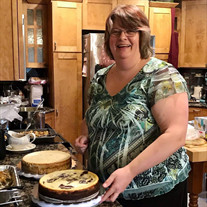 Julie Ann Grunigen was born November 17, 1961, in Salem, Oregon, to Bernard Joseph and Leona Kinion Mann. She died Wednesday, September 22, 2021, in Tulsa, Oklahoma, at the age of 59 years. Julie completed her secondary education in Winston, Oregon, and graduated with the Douglas High School Class of 1979. She was married April 20, 1985, in Paducah, Kentucky, to Justin Grunigen. Julie spent most of her working life as a homemaker and caring for her family. Taking care of her family was first and foremost in her life and was the most rewarding to her. She was especially fond of her role as “Gigi/Nanny”. She also enjoyed sewing, gardening, making jewelry, and was the best at cooking. Those she leaves behind who hold many cherished memories include: Her husband; Justin, of the home Three sons; Douglas C. Grunigen, of Owasso, Oklahoma Justin R. Grunigen and wife April, of Tulsa, Oklahoma Nicholas S. Grunigen and wife Sarah, of Dublin, Ohio Grandchildren; Javin, Aurora, Cailan, Lenora, Jade, and Audrey Stepmother; Jean Mann, of Pensacola, Florida Sister; Lynn Morris, of Goodyear, Arizona Brother; Larry Mann and wife Leslie, of Goodyear, Arizona She was preceded in death by her parents, Leona and Bernard Mann Funeral service will be held 2:00 p.m. Thursday, September 30, 2021, at the Mowery Funeral Service Chapel in Owasso with Reverend Kevin Laufer officiating. Private family disposition will be held at a later date. The family requests memorial contributions be made in Julie’s memory to the John 3:16 Mission, 575 North 39th West Avenue, Tulsa, Oklahoma, 74127. Arrangements and services were entrusted to Mowery Funeral Service of Owasso. www.moweryfs.com

The family of Julie Ann Grunigen created this Life Tributes page to make it easy to share your memories.

Send flowers to the Grunigen family.