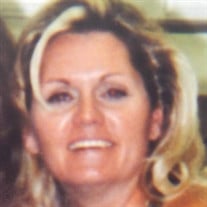 Kathy Sue Fry was born on September 18, 1955 in Tulsa, Oklahoma to Joseph Limuel Bowers and Frances Anneda (Ward) Bowers. She passed peacefully from this life on Sunday, June 20, 2021 in Tulsa, Oklahoma at the age of 65 years. Kathy was raised in Owasso, Oklahoma and attended Owasso High School. During high school, she was very active and was a member of the cheerleading squad, French Club, and National Honor Society. She also attended Votech and earned a dental assistant license. Kathy graduated from high school in 1973 and spent the next 18 years as a homemaker, dedicating her time to raising her three children. Kathy returned to school once her children were older and attended Tulsa Community College. She earned two associate degrees at TCC before transferring to the University of Tulsa where she earned her Bachelor of Science in Business Administration. After graduating, Kathy was quickly hired by the Williams Company as a computer programmer. However, she only worked as a programmer briefly because she was then accepted to the University of Tulsa College of Law. She earned her Juris Doctor degree and then in 1997 opened her own law practice, “Kathy S. Fry Attorney at Law”. Kathy specialized in both family and criminal law, but criminal law was her passion. She spent the next two decades defending clients against injustice and did plenty of pro bono work to help people who were unjustly accused but could not afford to pay for a lawyer. In her free time, Kathy loved nothing more than to spend her days with friends and family outside and in her pool. She was the family entertainer and acted as hostess for countless holiday parties. When she was not in the pool or hosting a party, Kathy loved to read, especially crime novels and nonfiction works. Her greatest joy was being with her children and grandchildren. Those she leaves behind hold many cherished memories of her and loved her dearly. She leaves behind her sons Travis Fry and wife Kari, Zach Fry and wife Raquel; Daughter Courtney Davis; 5 Grandchildren Caden, Tyler, Kyle, Nash, and Xavier; 2 Sisters Debbie Gipson and husband Dwayne, and Pamela Wright; Brother Jody Bowers; Half-brother Roby Bowers; Half-sister Angela Beyer and husband Jeff; Father Joseph Bowers and Stepmother Lois; and numerous nieces, nephews, cousins, and friends. She was proceeded in death by her Mother, Frances and Grandparents William Bowers and Bertie (McElfresh) Bowers and Bill Ward and Farie (Holt) Ward. A visitation will be held from 4:00 p.m. to 8:00 p.m. on Monday, June 28, 2021 at Mowery Funeral Service in Owasso. Funeral service will be held at 2:00 p.m. on Tuesday, June 29, 2021 at the Mowery Funeral Service Chapel in Owasso. A reception will immediately follow the service at Owasso First Assembly of God Church: 9341 N. 129th E. Ave. Owasso, OK.

Kathy Sue Fry was born on September 18, 1955 in Tulsa, Oklahoma to Joseph Limuel Bowers and Frances Anneda (Ward) Bowers. She passed peacefully from this life on Sunday, June 20, 2021 in Tulsa, Oklahoma at the age of 65 years. Kathy was raised... View Obituary & Service Information

The family of Kathy Sue Fry created this Life Tributes page to make it easy to share your memories.

Send flowers to the Fry family.