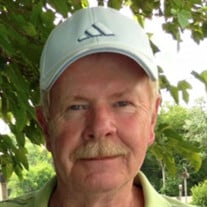 Kelly Dean McGuire was born June 4, 1951, in Ponca City, Oklahoma, to Thomas Russell and Betty June Morgan McGuire. He died September 7, 2020, at his home in Verdigris, Oklahoma, at the age of 69 years. Kelly moved with his mother and father to Bartlesville, Oklahoma, in 1953, before moving to a new home in Owasso, Oklahoma, in 1955. Kelly completed his secondary education in Owasso and graduated with the Owasso High School Class of 1969. After high school, he joined the United States Navy in 1971 at which time he was stationed at the Pentagon. He worked with several high-ranking Admirals from 1972 unto his honorable discharge in 1975. While serving with the Navy, he became a father to Carey Allyson McGuire. He was married in 1982 to Deanna Doll and they made their home in Grove, Oklahoma, where they raised their son, Jerrod Morgan McGuire. Kelly was a self-made business owner, owning and operating several successful businesses. His favorite was Precision Honing where he and Deanna traveled to VA hospitals in multiple states repairing surgical instruments. He enjoyed his role of “Grandpa”, spending time with his grandkids. He also enjoyed spending time with friends and family on the lake or at the golf course. He was extremely fond of his German Shepherds, Lexi, and Boomer. He eventually moved back to Verdigris, Oklahoma, where he lived until his passing. Those he leaves behind who hold many cherished memories include: His wife; Deanna Daughter; Carey McGuire Hoggatt and husband Jim Son; Jerrod McGuire and wife Vanessa Grandchildren; Jacob Rist, Sydney Hoggatt, Erik McGuire, Reed McGuire, and Allyson McGuire Brothers; William Thomas McGuire, Gerald Pointer, and Richard Pointer Sister; Deborah McGuire Molina And a host of nieces, nephews, and other relatives and friends. Funeral service will be held 2:00 p.m. Monday, September 14, 2020, at the Mowery Funeral Service Chapel in Owasso with Destinee Pruitt officiating. Funeral services were entrusted to Mowery Funeral Service of Owasso. www.moweryfs.com

Kelly Dean McGuire was born June 4, 1951, in Ponca City, Oklahoma, to Thomas Russell and Betty June Morgan McGuire. He died September 7, 2020, at his home in Verdigris, Oklahoma, at the age of 69 years. Kelly moved with his mother and father... View Obituary & Service Information

The family of Kelly Dean McGuire created this Life Tributes page to make it easy to share your memories.

Send flowers to the McGuire family.