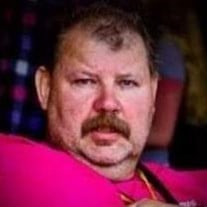 Kelly Lee Walls was born June 14, 1958, in Altus, Oklahoma to Kelsey Oren Doris Eva Wade Walls. He died Tuesday, April 23, 2019, in Broken Arrow, Oklahoma, at the age of 60 years. Kelly moved with his family to Catoosa, Oklahoma, where he completed his secondary education and graduated with the Catoosa High School Class of 1977. He continued his education with the Oklahoma State University Fire Service Training. He spent most of his working life with the Rolling Hills Fire Department before his retirement in 2015 as deputy chief. He was a member of the International Association of Firefighters. Kelly was married September 26, 1993, in Harrison, Arkansas, to Kim Swaggerty. He enjoyed a variety of pastimes, including hunting and fishing, but especially spending time broadcasting with his ham radio. He was known to be an avid Oklahoma State University Cowboys football fan. He also enjoyed participating as a storm chaser. Those he leaves behind who hold many cherished memories include: His wife; Kim, of the home Son; Kevin Walls, of Broken Arrow, Oklahoma Daughter; Lindsay Robbins and husband Chase, of Broken Arrow, Oklahoma Grandchildren; Dakota Walls and Kolton Walls Great grandson; James Walls Sister and brother-in-law; Beckie and Jerry Dearman, of Sand Springs, Oklahoma He was preceded in death by his parents, granddaughter, Eva Ann Robbins, and one sister, Sandy Stevens. Visitation will be held from 1:00 p.m. to 5:00 p.m. Sunday, April 28, 2019, at Mowery Funeral Service in Owasso. Funeral service will be held 10:00 a.m. Monday, April 29, 2019, at the Mowery Funeral Service Chapel in Owasso with Pastor Junior Hogue officiating. Committal service and interment will follow at Wofford Cemetery in Catoosa, Oklahoma. The family requests memorial contributions be made to Hydrants of Hope, 12898 East 510 Road, Claremore, Oklahoma, 74019, or your local volunteer fire department. Arrangements and services were entrusted to Mowery Funeral Service of Owasso. www.moweryfs.com

Kelly Lee Walls was born June 14, 1958, in Altus, Oklahoma to Kelsey Oren Doris Eva Wade Walls. He died Tuesday, April 23, 2019, in Broken Arrow, Oklahoma, at the age of 60 years. Kelly moved with his family to Catoosa, Oklahoma, where he... View Obituary & Service Information

The family of Kelly Lee Walls created this Life Tributes page to make it easy to share your memories.

Send flowers to the Walls family.