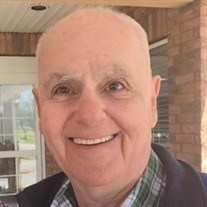 Walter Kenneth Purnell was born January 17, 1939, in Wells Tannery, Pennsylvania, to Walter Matthew and Goldie Mae Mellott Purnell. He died Saturday, June 6, 2020, in Broken Arrow, Oklahoma, at the age of 81 years. Ken completed his secondary education in Hustontown, Pennsylvania, and graduated with the Forbes Road Joint High School Class of 1957. He was a veteran of the armed forces having served his country honorably with the United States Army. He was married June 26, 1965, in Chambersburg, Pennsylvania, to Ruthie Diehl. Ken spent over 41 years working for U.S. Airways as director of automated marketing. After his retirement he made his home in Skiatook, Oklahoma. He enjoyed a variety of pastimes, especially grilling for family and friends. In his later years he enjoyed occasional visits to the casino with his girlfriend Ruth. He was particularly fond of his role of “Grandpa” to his grandchildren. Those he leaves behind who hold many cherished memories include: Son; Dave Purnell and husband Shawn Wittrock, of Broken Arrow, Oklahoma Grandchildren; Katie Curtis and husband Ben, of Pensacola, Florida Rebecca Livingston and husband Mike, of Tallahassee, Florida Jill Trevino and husband Jacob, of Owasso Caroline Purnell, of Broken Arrow Adrienne Purnell, Elizabeth Purnell, Nicole Purnell, And Loren Purnell, all of Owasso Great grandchildren; Bellamee and DesMarco Trevino, and Brennan Curtis Sister; Dorothy Weaver, of St. Hedwig, Texas He was preceded in death by his parents, his wife, Ruthie, and brother, Jim Purnell. Private family services will be held at a later date. Arrangements and services were entrusted to Mowery Funeral Service of Owasso. www.moweryfs.com

The family of Ken Purnell created this Life Tributes page to make it easy to share your memories.

Send flowers to the Purnell family.