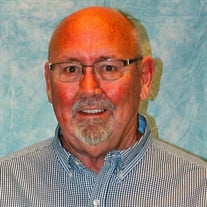 Kenneth Dale “Gramps” Bauer was born on February 28, 1943 in Fort Lupton, Colorado to John and Olga (Janke) Bauer. Ken passed away, surrounded by those he loved, on Sunday, November 11, 2018, in Owasso, Oklahoma at the age of 75. Ken was raised and educated in Mead, Colorado, graduating from Mead High School in 1961. He then enlisted and served as a Gunner and Helicopter Mechanic in the United States Marine Corps, where he served in Vietnam. While home on leave, Ken married his high school sweetheart Sharon Lee (Magnie) on February 27, 1965 in Longmont, Colorado. They welcomed 3 beautiful children into the world, and have celebrated 53 wonderful anniversaries. Ken subsequently obtained his A&P License from the Naval Air Training Center in Memphis, Tennessee. After serving 4 years in the Marine Corps, he was honorably discharged and then spent most of his working life as an Aircraft Mechanic. He was employed with Frontier Airlines in Denver, Colorado for 18 years. In 1986, Ken sought employment with American Airlines in Tulsa and enjoyed serving them for 20 years, retiring as a Crew Chief. Ken resided in Owasso, OK where he attended Faith Lutheran Church there, becoming a lifelong member. He also belonged to the Kats and Jammers Street Rod Club of Tulsa, traveling to car shows across the United States. He was an avid Denver Broncos fan and had a variety of pastimes such as: restoring street rods, gardening, fishing, traveling, frequenting car shows in his ‘38 Ford, and attending all his grandchildren’s sporting events. He will be sorely missed by: Wife: Sharon Bauer of Owasso Children: Greg Bauer and wife Cynthia, of Owasso Kurt Bauer and wife Angi, of Owasso Shelly Hawk and husband Chris, of Owasso 6 Grandchildren: Korbin Bauer, Nathan Bauer, Alyssa Hawk, Corina Bauer, Kolby Bauer, Logan Hawk Sisters: Jan Wolf and husband Mel, of Loveland, Colorado Mildred Dalpra, of Longmont, Colorado Brother in law: David Bergan, of Northglenn, Colorado Sister in law: Myrna Barney, of Loveland, Colorado Many nieces and nephews. He was preceded in death by his parents, John and Olga; sisters Barbara, Ruth, and Esther, and brother, John Jr. Memorial Service will be held 10:30 a.m. Wednesday, November 21, 2018 at Faith Lutheran Church in Owasso with Pastor Mark Neumann officiating. Flowers are welcomed and a memorial fund at the VFW Post 577 has also been established. Arrangements and services were entrusted to Mowery Funeral Service of Owasso.

The family of Kenneth Dale "Gramps" Bauer created this Life Tributes page to make it easy to share your memories.

Send flowers to the Bauer family.