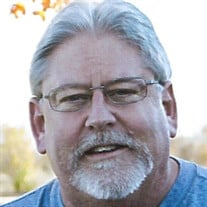 Kenneth Wesley Brown was born September 19, 1960 in Tulsa, Oklahoma to Billy Warren Brown and Pauline (Taylor) Brown. He passed from this life on Thursday, October 25, 2018, in Tulsa, Oklahoma, at the age of 58 years. Ken was raised and educated in Tulsa, Oklahoma and graduated with the East Central High School Class of 1978. After high school he attended classes at Tulsa Technology Center. Ken was married to Karen Kay (Reynolds) Brown in Tulsa on October 14, 1983. Ken spent most of his working life as a salesman for Tank Specialties in Tulsa for 38 years. He has faithfully attended Stone Canyon Church of Christ in Owasso. Ken was a member of the Green Country Mustang Club. He was an avid OU fan and had a variety of pastimes such as traveling, hunting, and loving on his grandchildren and attending their soccer games. Those he leaves behind who hold many cherished memories include: Wife; Karen Brown, of Owasso Daughter; Jennifer Burgos and husband Victor, of Owasso 2 Grandchildren; Logan Wesley Burgos, of Owasso Riley Mason Burgos, of Owasso 2 Brothers; Robert Brown and wife Cathy, of Broken Arrow Ronnie Lemaster and wife Maxine, of Broken Arrow He was preceded in death by his parents, Billy and Pauline, and brother, Carlos. Visitation will be held 4:00 p.m. to 8 p.m. on Monday, October 29, 2018 at Mowery Funeral Service. Funeral Service will be held 3:00 p.m. Tuesday, October 30, 2018 at the Mowery Funeral Service Chapel in Owasso with Pastor Dean Aulerich officiating. In lieu of flowers, the family request that donations be made in Ken’s memory to St. Jude Children’s Hospital, 501 St. Jude Place, Memphis, Tennessee 38105. Arrangements and services were entrusted to Mowery Funeral Service of Owasso.

Kenneth Wesley Brown was born September 19, 1960 in Tulsa, Oklahoma to Billy Warren Brown and Pauline (Taylor) Brown. He passed from this life on Thursday, October 25, 2018, in Tulsa, Oklahoma, at the age of 58 years. Ken was raised and educated... View Obituary & Service Information

The family of Kenneth "Ken" Wesley Brown created this Life Tributes page to make it easy to share your memories.

Send flowers to the Brown family.