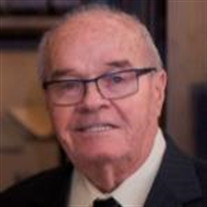 Kenneth Wayne Menefee passed from this life on Tuesday, August 10, 2021, in Claremore, Oklahoma at the age of 88 years. He was born on December 15, 1932, in Liberal, Kansas to Kenneth Malcolm Menefee and Dorothy Marie (Perry) Menefee. He was raised in Siloam Springs, Arkansas then moved to Walton, Kentucky where he attended junior high, and then moved to Watts, Oklahoma where he graduated with the Watts High School Class of 1951. Wayne then went on to attend school at Oklahoma A&M College in Stillwater, Oklahoma. While attending college, Wayne was drafted into the United States Army and served his country honorably. He was married on January 5, 1953, in Siloam Springs, Arkansas to Frances Emila (Morris) Menefee. Wayne and Frances moved to Owasso, Oklahoma in 1959, where he worked for a short time with McDonnell Douglas before a long career that began in 1960 as branch manager with Meadow Gold Dairies in Tulsa. Because of his fascination with trucks, he then changed careers in 1976 and became employed with Yellow Freight Systems in Tulsa, where he retired as Operations Manager in 1996. He was a longtime faithful member of Bethel Baptist Church in Owasso since 1959. Wayne spent most of his spare time owning and operating his lawn business, but he also loved golfing, fishing, building forts and playhouses for his grandchildren, watching basketball and football, and going camping. Those he leaves behind who hold many cherished memories include: His wife of over 68 years; Frances Menefee 3 Children; Waynett Pride and husband Mike Sherri Menefee Renee’ Mowery and husband Steve 5 Grandchildren; Courtney Pride and wife April Aimee Sklenicka and husband Kevin Mitchell Pride Brooke Clark and husband Daniel Grant Mowery and wife Ciara 5 Great Grandchildren Jaxon, Samuel, Case, Renn, and Seth Siblings; Doris Wolfe Bob Menefee and wife Sarah Shirley Somers and husband Lee Gary Menefee And a host of nieces and nephews He was preceded in death by his parents, Kenneth and Dorothy.

Kenneth Wayne Menefee passed from this life on Tuesday, August 10, 2021, in Claremore, Oklahoma at the age of 88 years. He was born on December 15, 1932, in Liberal, Kansas to Kenneth Malcolm Menefee and Dorothy Marie (Perry) Menefee. He was... View Obituary & Service Information

The family of Kenneth Wayne Menefee created this Life Tributes page to make it easy to share your memories.

Kenneth Wayne Menefee passed from this life on Tuesday, August...

Send flowers to the Menefee family.