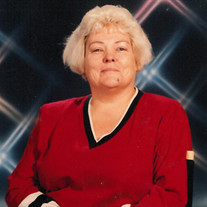 La’Rene (Anderson) Davies was born July 8, 1938 in Ogden, Utah to Lawrence Darrell Anderson and Mildred (Mathias) Anderson. She passed from this life on Saturday, October 13, 2018, in Claremore, Oklahoma, at the age of 80 years. La’Rene was raised and educated in Ogden and graduated with the Weber High School Class of 1956. After high school she attended Brigham Young University where she earned a bachelor’s degree in Elementary Education with a minor in Braille. La’Rene had a passion for the Utah School for the Blind and served as a state supervisor for the school. She spent most of her working as an Elementary Teacher at Barnes Elementary in Owasso where she worked for 23 years. La’Rene has been a faithful member of The Church of Jesus Christ Latter Day Saints in Owasso since 1985. She had variety of pastimes such as studying genealogy and watching and attending football games with her friends and family. Those she leaves behind who hold many cherished memories include: Husband; Calvin Davies, of Owasso Son; Robert Davies and wife Michelle, of Georgetown, Texas Daughter; Dianne Wallace and husband Richard, of Accokeek, Maryland 3 Grandchildren; Zachary Davies and wife Chelsea, of Phoenix, Arizona Alec Davies, of Georgetown, Texas Ashlyn Davies, of Georgetown, Texas 3 Siblings Gwynn Schwartz and husband Fred, of Sacramento, California Blaine Anderson and wife Deanie, of Los Angeles, California Connie Simpson and husband Dallas, of Hooper, Utah She was preceded in death by her parents, Lawrence and Mildred, and 2 brothers, Richard and Boyd. Funeral service will be held 10:00 a.m. Monday, October 22, 2018 at The Church of Jesus Christ Latter Day Saints in Owasso with Jamie Lykins conducting under direction of Bishop Steve Hendricks Pastor Jamie Lykins officiating. There will be visitation one hour prior to the service at the church. In lieu of flowers, the family requests memorial donations be made in La’Rene’s memory to Alzheimer’s Association, 2448 East 81st Street Suite 300, Tulsa, Oklahoma 74137. Arrangements and services were entrusted to Mowery Funeral Service of Owasso.

The family of La'Rene Davies created this Life Tributes page to make it easy to share your memories.

Send flowers to the Davies family.