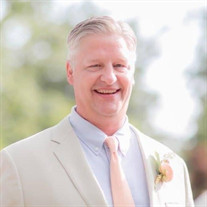 OBITUARY FOR LARRY FLECK Dr. Larry Eugene Fleck, Jr. was born on May 24, 1965, in Pawnee City, Nebraska to Larry Eugene Fleck, Sr. and Gayelon Marie (Rohrs) Fleck. He passed from this life on Wednesday, July 21, 2021, in Tulsa, Oklahoma at the age of 56 years. Larry was raised in St. Mary, Nebraska and went to school in Sterling, Nebraska and graduated as the valedictorian of the Sterling High School Class of 1983. He was married on June 8, 1985, in Tecumseh, Nebraska to Lynette Sue (Bartels) Fleck. To this union two children were born, Drew Michael in 1985 and Caitlin Elysia in 1989. Larry went to Southeast Community College, Doane College and University of Nebraska in Lincoln to further his education. He was in the banking field for many years prior to a decision to pursue a career in optometry. In July of 1997, the family relocated to Tulsa, Oklahoma and then in 1998 moved to Owasso, Oklahoma. He attended Northeastern State University School of Optometry in Tahlequah, Oklahoma where he graduated in 2001. He worked as an optometrist in Bartlesville at Bennett Vision for Dr. Jamie Bennett, then obtained a new role in 2008 at Eyecare of Claremore working for Dr. Eric Kuykendall. His most recent place of employment was at Dr. Jeff Long’s Children and Family Eyecare in Tulsa, where he worked alongside one of his good friends and optometry school classmates for over 4 years. Larry was a member of Foundations Church in Tulsa where he served as an usher. Larry enjoyed a variety of past times which included riding and working on his vintage motorcycles, rebuilding his 1968 Chevrolet C10 truck, spending time with his granddaughter, collecting guns, being a Squire, and watching Nebraska football. Larry was well-known for being the life of the party, entertainer, funniest man in the room, and the crowd favorite. He also had a serious side involving late-night talks in his beloved garage, a common gathering spot for many family and friends. Here, many memories were made, and every topic was discussed from politics to social issues, including conversations about his incredible family that he loved more than anything. Those he leaves behind who hold many cherished memories include: His Wife; Lynette Fleck Son; Drew Fleck and wife Tayla of Owasso, Oklahoma Daughter; Caitlin Fleck and boyfriend Anthony Barone of Tulsa, Oklahoma Granddaughter; Taytum Fleck and one on the way 2 Sisters; Tamara Fleck and her son Elias of Kanab, Utah Angela Bischof and husband Thomas and their children Ava and Max of Omaha, Nebraska Father; Larry Fleck, Sr. and wife Missy of Tecumseh, Nebraska Stepfamily; Grant Campbell of Alexandria, Virginia Clare Campbell and fiancé Jeff Olsen of Phoenix, Arizona Sisters in Law and Brothers in Law; Dan and Kim Bartels and sons Cody and Kyle of Tecumseh, Nebraska Deb and Mike Matulka of Thedford, Nebraska and daughters Jessie of Deshler, Nebraska, Melissa and Jared and son Brayden and daughter Hadleigh of Alliance, Nebraska, and Valerie of Valentine, Nebraska He was preceded in death by his mother, Gayelon and parents in law Harold and Leona Bartels, sister in law Barbara Jean Bartels, grandparents Otis Rohrs, Dorothy Rohrs Baum, Lester Baum, Ruth and Herbert Neeman. We will be having two Celebration of Life Services: 10:00 a.m., Saturday, August 14th, at Foundations Church, 4615 South Darlington Ave., Tulsa (this will be streaming live at foundationschurch.tv) Foundations Church. 2:00 p.m., Sunday, September 5th, at Maple Grove Church, rural Tecumseh, Nebraska. Family and friends are invited to Hartman Cattle Company venue after service located at 61878 732 Road (5 miles northwest of Tecumseh off Highway 41).

OBITUARY FOR LARRY FLECK Dr. Larry Eugene Fleck, Jr. was born on May 24, 1965, in Pawnee City, Nebraska to Larry Eugene Fleck, Sr. and Gayelon Marie (Rohrs) Fleck. He passed from this life on Wednesday, July 21, 2021, in Tulsa, Oklahoma at... View Obituary & Service Information

The family of Dr. Larry Eugene Fleck Jr. created this Life Tributes page to make it easy to share your memories.

Send flowers to the Fleck family.