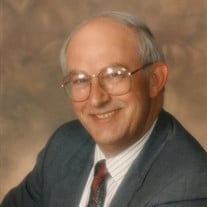 Larry Wayne Smith, son of John Loyd and Faye Ellene (Rachel) Smith was born September 27, 1941, in Russellville, Arkansas. Larry passed into the arms of his Lord and Savior Wednesday, March 16, 2022., in Tulsa, Oklahoma, at the age of 80 years. The Smith family moved from Arkansas to Oklahoma when Larry was 10 years old. He was saved and Baptized at Mingo Baptist Church in Tulsa. He attended Mingo Elementary School and graduated with the Tulsa Will Rogers High School Class of 1958. After graduation, he attended Oklahoma State University in Stillwater, majoring in accounting. He finished his accounting studies at the University of Tulsa. Larry worked in accounting at Flintco in Tulsa for a number of years. He then worked at Liberty Bank of Owasso and then First Bank of Owasso as an assistant vice-president. Larry also owned and operated Larry W. Smith Realty Company in Owasso. Larry was an active member of First Church in Owasso volunteering for many services as an usher and also maintaining lawn care. Larry married Patricia Louise Glenn on July 22, 1982, having been married for nearly 40 years. They enjoyed their church and family. His children and grandchildren were his delight. He enjoyed anything that was Oklahoma State Orange and Black. He also enjoyed Owasso Rams sports. He worked many Owasso Rams football games on the “Chain Gang”. He and his best friend of 70 years, Rick Dossett, solved many world problems standing at the fence watching Owasso Rams baseball. Larry was also very involved with Meals on Wheels in Owasso. He loved delivering weekly meals to those in need and loved visiting with them all. Even though COVID-19 restrictions and health issues had him homebound the last couple of years, he was always involved with his children and grandchildren. He was extremely proud of them all. Larry will be greatly missed. Those he leaves behind who hold many cherished memories include: His loving wife; Pat, of the home His children; Chris Smith and wife Suzie, of Bixby, Oklahoma Craig Smith and wife Tara, of Fayetteville, Arkansas Patrick Glenn and wife Briar, of Dallas, Texas Jason Glenn, of Tulsa, Oklahoma Cindy Boman and husband Brian, of Owasso, Oklahoma Grandchildren; Nikki Moore, Ryan Hayes, Casey Jo Roush, Shea Boman, Jacob Flannigan, Katie Ridgeway, and Molly Glenn Great grandchildren; Conner Hayes, Kennedy Moore, Owen Roush, and Oliver Roush Sister; Judy Barter and husband Lynn, of Owasso, Oklahoma Brother-in-law; Rick Rogers, of Bixby, Oklahoma Best friend; Rick Dossett and wife Suzanne, of Owasso, Oklahoma And a host of nieces, nephews, cousins, and other relatives and friends He was preceded in death by his parents, Loyd and Faye Smith, sister, Donna Rogers, and nephew, Captain Wade Barter. Visitation will be held from 2:00 p.m. to 6:00 p.m. Sunday, March 20, 2022, at Mowery Funeral Service in Owasso. Final resting place will be at Fairview Cemetery in Owasso, Oklahoma. The family request memorial contributions be made in Larry’s memory to Meals on Wheels, 12620 East 31st Street, Tulsa, Oklahoma, 74146. Arrangements and services were entrusted to Mowery Funeral Service of Owasso. www.moweryfs.com

Larry Wayne Smith, son of John Loyd and Faye Ellene (Rachel) Smith was born September 27, 1941, in Russellville, Arkansas. Larry passed into the arms of his Lord and Savior Wednesday, March 16, 2022., in Tulsa, Oklahoma, at the age of 80 years. The... View Obituary & Service Information

The family of Larry Wayne Smith created this Life Tributes page to make it easy to share your memories.