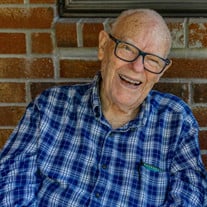 Larry Doran Sutter, 88 years, was born March 10, 1932, in Kelly, Iowa, to Ralph and Nina. Larry completed Barber College after high school and worked in the family business. He later pursued a career in electronic engineering and completed electronic school in Kentucky. He was married October 11, 1953, in Des Moines, Iowa, to Joanne Couchman. He spent much of his working life as an electronic technician in broadcast television and then moved into the aerospace industry with Lockheed Martin and later with Coleman Research. He was a lifelong faithful Christian who loved God and loved his church passionately. He enjoyed a variety of pastimes including music and singing. He loved playing piano and was self-taught learning to read music and play by ear. He also enjoyed woodworking and was an all-around handyman. He had a love of all things ice cream and would never pass up the opportunity to partake. Those he leaves behind who hold many cherished memories include: His wife of 67 years; Joanne, keeper of the home Children; Son, Kendall Sutter, of Owasso, Oklahoma Daughter, Amy Oelberg, of Deltona, Florida Grandchildren; Amber Blackwood, of San Jose, California Heather Johnson, of Ada, Oklahoma Ann Godshall, of Apopka, Florida Great grandchildren; Caleb Johnson, Bryony Blackwood, Norah Johnson, Isla Blackwood, and Elliott Johnson He was preceded in death by his parents, and two siblings, Nyals Sutter, and Frederick Sutter Private family disposition will be held at a later date. Arrangements and services were entrusted to Mowery Funeral Service of Owasso. www.moweryfs.com

The family of Larry Sutter created this Life Tributes page to make it easy to share your memories.

Send flowers to the Sutter family.