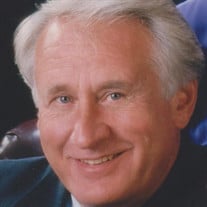 Larry Yeagley, 76, passed away on Tuesday, October 26, 2021. He was a man of deep faith and strong convictions who lived a life of honor, integrity, love of family and concern for others. His wry wit, subtle sense of humor and appreciation of candor were hallmarks of his personality. Larry was kind and empathetic and worked to make life more fulfilling to others. Born to Eileen and Earl Yeagley on November 18, 1944, Larry was a precocious son with a creative imagination and an abundance of energy. He graduated high school in South Bend, Indiana, where he was a key member of the varsity basketball team. He was recruited to attend St. Joseph’s College in Rensselaer, Indiana, and was awarded a full basketball scholarship. He graduated with honors and degrees in philosophy and sociology. He did post graduate work in medicine at Indiana University. Larry earned a juris doctorate in 1970 from the University of Tulsa. He joined the law firm of Houston, Davidson, Jacoby, Sonberg, Main and Nelson before being appointed as a municipal judge by Mayor Robert LaFortune in 1973. He served the Court and citizens of Tulsa with distinction. Among his many contributions, Judge Yeagley was instrumental in the success of Project Misdemeanant, a program that served as a means to give first time offenders a chance to clear their records through structured work programs and counseling. The program paired volunteer mentors with program participants. The mentor was often the first person that the young offender could admire and trust. Judge Yeagley counseled and befriended countless young people, spent time on the basketball court at the YMCA with them and inspired them to redirect the course of their lives. The program offered young people an opportunity for a more promising future. In 1984, Larry retired from the judge’s bench and joined the law firm of Harrold, Gregg and Harrold where he did legal work for International Chemical Company. His outstanding representation of the company led to an offer to assume the position of general counsel and subsequently vice president of Inter-Chem Inc. In that position Larry traveled the world and made lasting friends of the people with whom he did business. After a distinguished career of 31 years, he retired in 2007. A life-long love for antique cars began when Larry was 16 years old. He bought what appeared to be a pile of rubble, worked diligently and returned a MG TD to its original glory. When Larry and his wife of 50 years, Lucia, were first married and she laughingly admits they had no money for furniture, Larry purchased a 1955 Jaguar XK140. He restored the car to perfection. He then bought a rusty Jaguar XK 150 Drophead Coupe which he restored to magnificence with his son, Todd, and followed that with an MGA to restore with his daughter, Tristan. Larry became fascinated with Corvettes and his final project was the beautiful restoration of a red 1962 corvette which he thoroughly enjoyed cruising in around town. Larry never had an idle moment after retirement. He relished his life as a gentleman rancher, and avid fisherman and golfer, and an inveterate traveler. He was a very involved grandfather to his grandchildren who affectionately knew him as “Pops”. Larry is survived by his wife, Lucia, his son Todd, and daughter-in-law Jill, his daughter Tristan, son-in-law Travis McGill, and by his nine grandchildren; Tobin, Teagan, Trevin, Trayton, and Tennison McGill, Maeve, Cormac, Jack and Everett Yeagley. He also survived by his sister, Jill Yeagley, her husband Jim Price, their son Jeremy Price, his sister-in-law Gerry Holland, his sister-in-law Anita Brinson, brother-in-law David Brinson, his nephew Duke Bell, and his niece Robin Reichert and their families. Larry’s life embodied a quote by Saint Teresa of Calcutta, “Faith in action is love- and love in action is service”. In this spirit, contributions may be made in his memory to either: Friends of Catholic Education, 1127 East 33rd Place, Tulsa, Oklahoma 74105, 918-877-2200 or Up With Trees, 1102 South Boston Avenue, Tulsa, Oklahoma 74119, 918-610-8733. A Rosary prayer service will be held 2:00 p.m. Sunday, October 31, 2021, at Mowery Funeral Service in Owasso. A Funeral Mass will be held 2:00 Monday, November 1, 2021, at Holy Family Cathedral in Tulsa. Committal service and interment will follow at Rose Hill Memorial Cemetery in Tulsa. Arrangements and services were entrusted to Mowery Funeral Service of Owasso. www.moweryfs.com

Larry Yeagley, 76, passed away on Tuesday, October 26, 2021. He was a man of deep faith and strong convictions who lived a life of honor, integrity, love of family and concern for others. His wry wit, subtle sense of humor and appreciation... View Obituary & Service Information

The family of Laurence "Larry" Alan Yeagley created this Life Tributes page to make it easy to share your memories.

Send flowers to the Yeagley family.