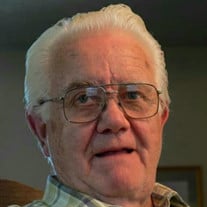 Lewis Franklin Harris was born May 7, 1930, in a tent with a dirt floor near Eakly, Oklahoma, to Herndon Emerson and Emma Mae Kruger Harris. He died Sunday, April 5, 2020, at the Claremore Veterans Center in Claremore, Oklahoma, at the age of 89 years. Lewis was a veteran of the armed forces having served his country honorably with the United States Navy then again with the United States Air Force during the Korean War. He was married February 17, 1955, in St. Louis, Missouri, to Jean Brooks. They made their home in several places before settling in Collinsville, Oklahoma, in 1977. After serving in the Air Force, Lewis was in banking as a loan officer for several years. Lewis was a public servant and possibly best known as serving as Tulsa County Commissioner for over 28 years until he retired from the office. He was a dedicated servant for his constituents in District #1. Through his efforts, county roads stayed in great condition and little league ballparks were built. Through combined efforts, he had a hand in getting the bond issue passed for the construction of the new County Jail, as well as helping Driller’s Stadium be built. He received the honor of throwing out the first pitch of the first game played there. Lewis enjoyed a variety of pastimes including traveling, camping, and fishing, as well as his volunteer work with the Northside Y Pancake breakfast and the 16 mile Walk for Mankind. He also announced a variety of sporting events in Tulsa such as little league baseball and NWA wrestling at the fairgrounds. He had a love for boxing and was the commentator at amateur boxing events. Early in his career, he changed the accounting and distribution of funds for Tulsa County, and that became the model for other counties state-wide. Those he leaves behind who hold many cherished memories include: His wife of over 65 years Jean Harris Children; Wade Harris and wife April, of Collinsville, Oklahoma Karen Fritts and husband Paul, of Fort Greely, Alaska Lee Ann March and husband Chris, of The Colony, Texas Stepdaughter; Dianne Boggs, of Bixby, Oklahoma 7 Grandchildren 5 Great Grandchildren 3 Great- Great Grandchildren Three brothers; Stan Harris and wife Betty, of Enid, Oklahoma Don Harris and wife Robyn, of Savannah, Texas Dan Harris and wife Kayoko, of Tokyo, Japan Sister; Mary Billey, of Edmond, Oklahoma He was preceded in death by his parents Herndon and Emma Harris, brothers, Edwin H. Harris, and Benjamin Harris, and one sister, Annabelle Burnsed. A private family graveside will be held at a later date. Final resting place will be at Ridgelawn Cemetery in Collinsville, Oklahoma. The family requests memorial contributions be made to the John 3:16 Mission, P.O. Box 1477, Tulsa, Oklahoma, 74103. Arrangements and services were entrusted to Mowery Funeral Service of Owasso. www.moweryfs.com

Lewis Franklin Harris was born May 7, 1930, in a tent with a dirt floor near Eakly, Oklahoma, to Herndon Emerson and Emma Mae Kruger Harris. He died Sunday, April 5, 2020, at the Claremore Veterans Center in Claremore, Oklahoma, at the age... View Obituary & Service Information

The family of Lewis Franklin Harris created this Life Tributes page to make it easy to share your memories.

Send flowers to the Harris family.