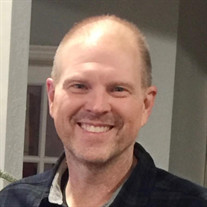 ​Loran Charles King was born October 25, 1963, in Tulsa, Oklahoma, to John Austin King and Sharon Doris Bull King. He passed from this earth on Wednesday, February 23, 2022, in Tulsa, Oklahoma, at the age of 58 years. Loran was reared and educated in Collinsville, Oklahoma, and graduated with the Collinsville High School Class of 1982. While in high school he was active with Collinsville Future Farmers of America and earned the Oklahoma State FFA Degree. He attended Rogers State University in Claremore, Oklahoma, where he earned his Police Science degree. He continued his education with Bellevue University earning his bachelor's degree in Management. ​Loran began working as a volunteer firefighter at age 17. He became a firefighter and EMT/Paramedic at Owasso and also worked for EMSA. In 1986, he went on a run into a hospital, and happened to meet one of the new employees. He went to his parent’s house that night to tell them, “I met the girl I’m going to marry, but she doesn’t know it yet.” He and Holly Orr were married on January 16, 1988, in Tulsa. ​Loran then transferred to work at the Owasso Police Department as a police officer and later worked with the Tulsa County Sheriff’s Office for 17 years as a Reserve Officer where a portion of that service was on bike patrol. In 1995, he volunteered his services to aid with the Oklahoma City Bombing. This was a difficult and life changing event. After retiring from the police department, he worked several years as a supervisor in security at St. Francis Hospital in Tulsa. He also worked as a campus police officer at Tulsa Community College. ​He moved on to end his career at Bank of Oklahoma Financial as a security supervisor in corporate security and emergency management. One of his coworkers has described Loran as a “quality person that had the rare quality of breathing life into others around him. He strived for excellence in himself and others.” ​Loran was a leader who had a great work ethic and believed in treating everyone fairly, expecting the same in return throughout his whole life. ​Since a child, Loran has always been known to be quite a prankster, jokester, and full of sarcasm, and he was always getting his little brother Chris in trouble. One of our favorite stories told is when Loran was eight years old and he told his five-year-old brother that if he jumped off the roof of the house with a paper grocery sack over his head, he would just float to the ground. Chris trusted him, followed through and jumped off the roof with that paper grocery sack and was surprisingly left with only a mild concussion and minor bruises. Years later, their little sister always heard of this adventure and she thought, “if they could do that with a paper sack, then I know my umbrella will work much better than that.” ​Loran was a strong man of faith and had served as a deacon at the Owasso Church of Christ. He was currently serving on the security team at the Broken Arrow Church of Christ where he attended. He led church devotionals and taught Bible classes. He was an avid student of the Bible. His desire is that all will come to know the Lord and obey His Word. ​Loran enjoyed a variety of pastimes, including reading and he especially enjoyed cooking indoors and outdoors. He was the best grill master ever! He was a chef for future preacher training camp for young men. He also cooked for 50 Days of Food and Fun summer camp. Loran was so truly loved by so many friends, coworkers, family, and brothers and sisters in Christ. Those he leaves behind who hold many cherished memories include: His wife; Holly Children; Austin King and Sheridan King Brother; Chris King and wife Natasha Sister; Lori Lane and husband Kevin Parents; John and Sharon King He was preceded in death by his grandparents; Oran and Doris Bull, and Austin and Mable King. The family will be holding a come and go reception on Saturday, March 12, 2022, from 2:22p.m.-4:30p.m. at Broken Arrow church of Christ. Memorial contributions can be made in Loran’s memory to “In Search of the Lord’s Way” television program at P.O. Box 371, Edmond, OK 73083-9901 (he viewed this every Sunday and would invite you to do the same) or to Broken Arrow church of Christ (memo: Loran King Memorial Fund) 505 E. Kenosha, Broken Arrow, OK 74012 or Memo: Loran King Memorial fund (For Ukraine Missions) 505 E. Kenosha, Broken Arrow, OK 74012. Arrangements were entrusted to Mowery Funeral Service of Owasso. www.moweryfs.com

&#8203;Loran Charles King was born October 25, 1963, in Tulsa, Oklahoma, to John Austin King and Sharon Doris Bull King. He passed from this earth on Wednesday, February 23, 2022, in Tulsa, Oklahoma, at the age of 58 years. Loran was reared... View Obituary & Service Information

The family of Loran Charles King created this Life Tributes page to make it easy to share your memories.

Send flowers to the King family.