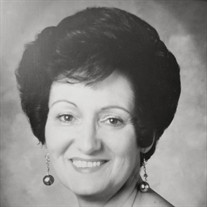 Lorean “Lore” Bradford was born September 3, 1932, in Sunset, Arkansas, to Jacob and Mary Bertha (Shepard) Fields. She died peacefully in her home surrounded by family, Wednesday, September 9, 2020 in Owasso, Oklahoma, at the age of 88 years. Lore was admired by all who met her, due to her abundance of kindness and grace. She had a true servant's heart, and a love for the Lord. Lore attended Lois Smith Beauty College, in Fullerton, California, and became a beautician. She was married April 1, 1950, in Upland California, to Bill Edward Bradford. Lore later became a beauty instructor at Fullerton Junior College. She enjoyed a variety of pastimes including painting, sewing, and working in her yard. She also enjoyed traveling, fishing, and camping with her husband Bill. She especially enjoyed her grandkids and her role of “Granny”. After Bill’s passing in 2010, Lore moved to Owasso, Oklahoma, where she became active with the First Assembly of God. Those she leaves behind who hold many cherished memories include: her oldest son Bill (and Jodi Bradford) of Owasso, 12 grandchildren and 24 great grandchildren She was preceded in death by her parents, Jacob and Mary, her husband, Bill Sr., her youngest son, Rick, three brothers, and three sisters. Graveside funeral service will be held 2:00 p.m. Wednesday, September 16, 2020, at Friendship Cemetery in Springdale, Arkansas, with Pastor Bruce McCarty officiating. Arrangements and services were entrusted to Mowery Funeral Service of Owasso. www.moweryfs.com

The family of Lorean "Lore" Bradford created this Life Tributes page to make it easy to share your memories.

Send flowers to the Bradford family.