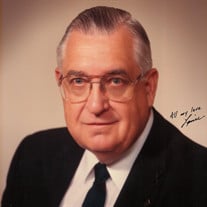 Louis Hampton Enloe was born November 10, 1926, in Electra, Texas, to Lucious Hampton Enloe and Carrie Lee (Tucker) Enloe. He passed from this life on Saturday, August 31, 2019, in Owasso, Oklahoma, at the age of 92 years. Louis was raised and educated in Oklahoma City, Oklahoma and graduated with the Capital Hill High School Class of 1944. After High School he enlisted and served his country honorably in the United States Army. He was married on April 20, 1946 in Oklahoma City to Shirley Nadine (Pavey) Enloe. Louis earned a bachelor’s degree in Business Administration from the University of Tulsa. He spent most of his working life as Vice President of Human Resources at Oneok in Tulsa for almost 47 years. Louis was a long-time faithful member of First Christian Church in Owasso until his health began to decline. He enjoyed a variety of past times such as volunteering as a docent at Gilcrease Museum in Tulsa, gardening, raising his own grove of pecan trees, and loving his dogs. Those he leaves behind who hold many cherished memories include: Daughter; Sherry Neph, of Collinsville Son; Lowell Enloe and wife Rhonda, of Lucas, Texas 2 Grandsons; Elliot Neph and wife Andrea, of Owasso Evan Neph and wife Kendall, of Denver, Colorado Brother; Carroll Gene Enloe and wife Dortha, of Mustang, Oklahoma He was preceded in death by his parents, Lucious “Boss” and Carrie, and his wife, Shirley. Visitation will be held from 4:00 p.m. to 8:00 p.m. Wednesday, September 4, 2019 at Mowery Funeral Service. Funeral service will be held at 2:00 p.m. Thursday, September 5, 2019, at the Mowery Funeral Service Chapel in Owasso with Pastor Ben Killion officiating. Interment will follow at Graceland Memorial Park Cemetery in Owasso. In lieu of flowers the family requests donations be made in Louis’s memory to Ward Wiseman Animal Haven, 15628 N. 129th E. Ave, Collinsville, OK 74021. Arrangements and services were entrusted to Mowery Funeral Service of Owasso.

Louis Hampton Enloe was born November 10, 1926, in Electra, Texas, to Lucious Hampton Enloe and Carrie Lee (Tucker) Enloe. He passed from this life on Saturday, August 31, 2019, in Owasso, Oklahoma, at the age of 92 years. Louis was raised... View Obituary & Service Information

The family of Louis Hampton Enloe created this Life Tributes page to make it easy to share your memories.

Send flowers to the Enloe family.