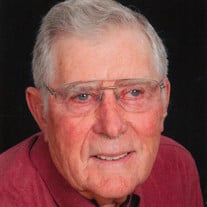 Loyd Franklin “Bud” Leach was born November 12, 1932, in Silva, Missouri, to Lyman Charles and Mary Maggie Meador Leach. He died Tuesday, September 18, 2018, in Tulsa, Oklahoma, at the age of 85 years. Bud was reared and educated in Patterson, Missouri, and graduated with the Patterson High School Class of 1951. He was a veteran of the United States Air Force and served his country honorably for 26 years. Upon retirement from the United States Air Force Bud worked as a Communications Specialist at American Airlines in Tulsa. He was married August 17, 1958, in Patterson to Carole Green. They relocated their home to Owasso, Oklahoma, in 1971, where they have lived and raised their family since that time. He and Carole have been longtime faithful members of First Baptist Church in Owasso. Bud served in many roles such as Sunday school teacher for 5th and 6th graders, as well as an ordained deacon and a greeter. He was very active with the Future Owasso Rams during the 70’s and 80’s and coaching his children in basketball, baseball, and softball. He also served on the Park Board with the City of Owasso. Bud enjoyed a variety of pastimes including golfing and spending time out on the course. He particular enjoyed traveling, especially taking vacations to his favorite spots in Hawaii and Alaska. Most important to him was spending that time with his family whom he dearly cherished. Family members include; His wife of 60 years; Carole, of the home Three children; Dale Leach and wife Tina, of Skiatook, Oklahoma Terrie Hendricks and husband David, of Owasso, Oklahoma Sherrie Elmore and husband Randy, of Collinsville, Oklahoma Eight grandchildren; Kyle Dossett and wife Whitney; Rachel Kemp and husband Andrew Shelby Allen and husband Joseph, Josh Strickler and wife Ricci Matt Strickler, Bailey Wilson and husband Korey, Savannah Smith and husband Stephen, Chance Hendricks and wife Shelby Great grandchildren; Addison, Ryan, Jase, Conner, Chloe, Lexi, Alexis, and Sophia Three sisters; Louise O’Havre and husband Larry Jane Fox and husband Charles Mary Westmoreland and husband Bob Brother; Kenneth Leach and wife Ruth Ann And a host of other relatives and friends. He was preceded in death by his parents. Visitation will be held from 5:00 p.m. to 8:00 p.m. Thursday, September 20, 2018, and funeral 10:00 a.m. Friday, September 21, 2018, both at First Baptist Church of Owasso. Serving as officiating ministers will be Pastor Chris Wall and Pastor Phil Platner. Serving as casket bearers will be Bud’s grandsons, Matt Strickler, Josh Strickler, Kyle Dossett, Andrew Kemp, Joseph Allen, Korey Wilson, Chance Hendricks, and Stephen Smith. Committal service and interment will follow at Fairview Cemetery in Owasso. The family requests memorial contributions be made to Mission Owasso, 11341 North Garnett Road, Owasso, Oklahoma, 74055. Arrangements and services were entrusted to Mowery Funeral Service of Owasso. www.moweryfs.com

The family of Loyd Franklin Leach created this Life Tributes page to make it easy to share your memories.

Send flowers to the Leach family.