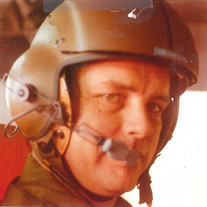 Luther Neal Kelley was born July 31, 1937 in Norfolk, Virginia to William Lester Kelley and Ruth Elnora (Peed) Kelley. He passed from this life on Saturday, October 20, 2018, in Owasso, Oklahoma at the age of 81 years. Luther did not finish school but instead enlisted in the United States Marine Corps and later in the United States Army, where he earned his GED. He was married on September 12, 1958 in Fort Smith, Arkansas to Emma Jean (Kinsey) Kelley. Luther spent most of his working life in the Army and received his honorable discharge upon retiring from the military. He was an avid OU fan and had a variety of pastimes such as woodworking, making birdhouses, bowling, and hanging out at Walmart. Those he leaves behind who hold many cherished memories include: Wife; Emma Kelley, of Owasso 5 Children; Sandra Burkett, of Surcey, Arkansas Troy Kelley and wife Shelley, of Long Bottom, Ohio Vickey Blankenship and husband Wayne, of Catoosa Robert Kelley, of Mississippi Keith Pruitt and husband Douglas, of Owasso 10 Grandchildren and 7 Great Grandchildren Sister; Velma Elizabeth “Betty” Hickey, of Virginia Beach, Virginia He was preceded in death by his parents, William and Ruth, a son, William Lester, and brother, Thomas. Funeral Service will be held 11:00 a.m. Friday, October 26, 2018 at the Mowery Funeral Service Chapel. There will be visitation one hour prior to the service. Interment will be held on a later date at Graceland Memorial Park Cemetery in Owasso. In lieu of flowers, the family requests memorial donations be made in Luther’s memory to the Veteran’s Suicide Hotline – Active Heroes, 5809 Bardstown Road, Louisville, KY 40291. Arrangements and services were entrusted to Mowery Funeral Service of Owasso.

Luther Neal Kelley was born July 31, 1937 in Norfolk, Virginia to William Lester Kelley and Ruth Elnora (Peed) Kelley. He passed from this life on Saturday, October 20, 2018, in Owasso, Oklahoma at the age of 81 years. Luther did not finish... View Obituary & Service Information

The family of Luther Neal Kelley created this Life Tributes page to make it easy to share your memories.

Send flowers to the Kelley family.