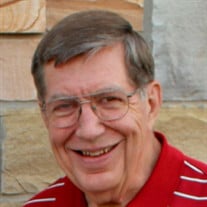 Lynn Edward Wedemeyer was born on March 19, 1948 in Atlantic, Iowa to Walter Wedemeyer and Elaine Ruby (Smith) Wedemeyer. He died on Friday, January 1, 2021 in Tulsa, Oklahoma at the age of 72 years. He was raised and educated in Adair, Iowa where he graduated with the Adair-Casey High School Class of 1966. Lynn went on to earn his bachelor’s degree in business administration from Iowa State University. He was married on June 1, 1969 in Des Moines, Iowa to Marilynn G. (Ticknor) Wedemeyer. Lynn was gifted with knowledge about computers and spent most of his working life as a computer programmer. He worked for American Republic Insurance in Des Moines for 8 years and then with American Airlines in Tulsa, Oklahoma for 33 years. He was a faithful and active member with First United Methodist Church in Owasso, Oklahoma since moving to Owasso in 1979. Lynn was an avid Iowa State Cyclones fan and enjoyed a variety of past times such as playing golf, playing cards and games, and working in the yard, but most of all he loved spending time with his grandchildren. Those he leaves behind who hold many cherished memories include: His wife of 51 years; Marilynn Wedemeyer 4 Children; Christine Barsness and husband Gary Kevin Wedemeyer and wife Jennifer Connie Easterwood and husband Brian Korey Wedemeyer 6 Grandchildren; Makenzie Wedemeyer, Kylan Wedemeyer, Sierra Barsness, Katelyn Easterwood, Kinley Easterwood, and Kelsey Easterwood Brother; Larry Wedemeyer and wife Arlene 2 Sisters; Joyce Johnston Marilyn White and husband Carl And a host of in-laws, nieces, nephews and other relatives and friends. He was preceded in death by his parents, Walter and Elaine, mother and father-in-law Helen and Veryl Ticknor and 2 brothers-in-law, Larrie Johnston and Richard Shoesmith. Visitation will be held from 5:00 p.m. to 8:00 p.m. on Wednesday, January 6, 2021 at Mowery Funeral Service in Owasso. Funeral Service will be held 10:30 a.m. on Thursday, January 7, 2021 at First United Methodist Church in Owasso with Pastor Jim Cinocca officiating. Private family graveside will follow at Fairview Cemetery in Owasso. In lieu of flowers the family requests memorial donations be made in Lynn’s memory to The Little Light House, 5120 E. 36th St., Tulsa, OK 74135 or First United Methodist Church Owasso, 13800 E. 106th St. N., Owasso, OK 74055. Arrangements and services were entrusted to Mowery Funeral Service.

Lynn Edward Wedemeyer was born on March 19, 1948 in Atlantic, Iowa to Walter Wedemeyer and Elaine Ruby (Smith) Wedemeyer. He died on Friday, January 1, 2021 in Tulsa, Oklahoma at the age of 72 years. He was raised and educated in Adair, Iowa... View Obituary & Service Information

The family of Lynn Edward Wedemeyer created this Life Tributes page to make it easy to share your memories.

Send flowers to the Wedemeyer family.