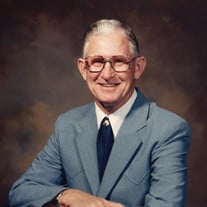 Mack Brumfield was born July 18, 1924, in Tulsa, Oklahoma, to Arthur Franklin and Nellie Belle Dallas Brumfield. He died Sunday, April 25, 2021, in Owasso, Oklahoma, at the age of 96 years. Mack served his country honorably with the United States Army during World War II, including active duty in Burma and received the China War Memorial Badge. He was married October 17, 1959, in Tulsa to Pansy “Boots” Johnston. She preceded him in death on July 10, 2003. He later was married to Doris Bailey, who preceded him in death December 24, 2020. In his early adulthood Mack worked as a barber, but most of his working life was spent with the City of Tulsa as a street foreman. He had attended Rejoice Free Will Baptist Church in Owasso, then later attended Collinsville Free Will Baptist Church. He enjoyed a variety of pastimes, especially horses. He also enjoyed going to rodeos and watching the bull riding. He loved listening to Bluegrass music. Those he leaves behind who hold many cherished memories include: Daughter; Marilyn Pierce, of Owasso, Oklahoma Six children 17 Great grandchildren Eight great great grandchildren Brother; Elmer Brumfield, of Talala, Oklahoma He was preceded in death by his parents, his wives, and eight siblings. Visitation will be held from 4:00 p.m. to 8:00 p.m. Wednesday, April 28, 2021, at Mowery Funeral Service in Owasso. Funeral service will be held 11:00 a.m. Thursday, April 29, 2021, at Fireside Baptist Church with Pastor Claud Slate officiating. Committal service and interment will follow at Floral Haven Memorial Gardens in Broken Arrow, Oklahoma. The family requests memorial contributions be made to Faith Promise Missions, 11516 North 123rd East Avenue, Collinsville, Oklahoma 74021. Arrangements and services were entrusted to Mowery Funeral Service of Owasso. www.moweryfs.com

Mack Brumfield was born July 18, 1924, in Tulsa, Oklahoma, to Arthur Franklin and Nellie Belle Dallas Brumfield. He died Sunday, April 25, 2021, in Owasso, Oklahoma, at the age of 96 years. Mack served his country honorably with the United... View Obituary & Service Information

The family of Mack Brumfield created this Life Tributes page to make it easy to share your memories.

Send flowers to the Brumfield family.