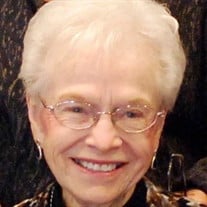 Mae Belle Reed was born June 30, 1927, near Oxford, Kansas, to Orie C. and Mamie Belle Wheeler Lucas. She died Tuesday, November 6, 2018, in Owasso, Oklahoma, at the age of 91 years. Mae Belle was the middle child of 13 and at the age of 4 yrs was given by the Lord's design, to another family to be raised. The Millers, JB and Hattie, including one dear brother, Delmont, became her new family. Mae Belle was reared and educated in Oxford, Kansas, and graduated with the Oxford High School Class of 1945. She was married December 27, 1946, in Winfield, Kansas, to Lester L. Reed. She had worked for the telephone company and later Fram filter, but her primary focus was as a homemaker and caring for her family. Mae Belle spent many years traveling with Les in his evangelism work as a Christian comedian. She was a longtime member of First Baptist Church in Owasso where she spent many years as a Sunday School teacher. She had been an active resident at the Baptist Village of Owasso and had even been honored as Volunteer Of The Year. Those she leaves behind who hold many cherished memories include: Three children; Linda Hinnen and husband Glade, of Tulsa, Oklahoma Danny Reed and wife Kathy, of Broken Arrow, Oklahoma Judi Smith, of Edmond, Oklahoma Grandchildren; Jayna Jones, Jayme Luster, Mindy Mages, Matt Smith, Cheryl Read, and Carla Melton 18 great grandchildren Siblings; Betty Purser, Colleen Hart, Ted Lucas, and Aletha Mobley She was preceded in death by her parents, husband Les, and infant twin daughters. Funeral service will be held 2:00 Sunday, December 16, 2018, at First Baptist Church in Owasso. The family requests memorial contributions be made to The Baptist Village Children’s Home General Fund or The Baptist Village Adams Fund, 7410 North 127th East Avenue, Owasso, OK 74055. Arrangements and services were entrusted to Mowery Funeral Service of Owasso.

The family of Mae Belle Reed created this Life Tributes page to make it easy to share your memories.

Send flowers to the Reed family.