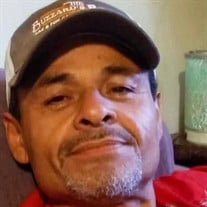 Manuel Anthony Villarreal III was born March 12, 1964, in Port Lavaca, Texas, to Manuel Anthony Villarreal, Jr., and Mary Sanchez. He died Saturday, April 6, 2019, in Tulsa, Oklahoma, at the age of 55 years. After completing his secondary education, Manuel went to HVAC Technical Training. He spent most of his working life as a general contractor and was known as an all-around handyman. He was married June 1, 2011, in Tulsa, Oklahoma, to Rhonda Twobabies. He enjoyed a variety of pastimes including fishing. He also enjoyed a variety of sports including wrestling and was an avid Dallas Cowboy fan. He was drawn particularly to the sport of boxing and actually spent time as a boxer. Most important to him was spending time with his friends and family. Those he leaves behind who hold many cherished memories include: His wife; Rhonda, of the home Son; Manuel Anthony Villarreal IV and wife Emily Fleetwood, of Sperry, Oklahoma Step-children; Amber Twobabies Thornton, of Bristow, Oklahoma Amy Twobabies, of Tulsa, Oklahoma Brother; Ray Valencia, of Bay City, Texas Sister; Elda Nora Banuelos, of Tulsa, Oklahoma Father; Manuel Anthony Villarreal, Jr. He was preceded in death by his mother, Mary Sanchez, and sister, Elda Banuelos Funeral service will be held 10:00 a.m. Friday, April 12, 2019, at the Mowery Funeral Service Chapel in Owasso with Pastor Leonard Pirtle officiating. Private family disposition will be held at a later date. Arrangements and services were entrusted to Mowery Funeral Service of Owasso.

The family of Manuel Anthony Villarreal created this Life Tributes page to make it easy to share your memories.

Send flowers to the Villarreal family.