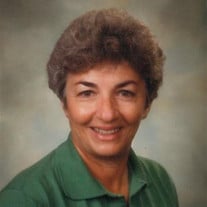 Margaret Jo Newberry was born May 22, 1939, in Durant, Oklahoma, to B.C. and Louellen Moore Newberry. She died Friday, August 17, 2018, in Owasso, Oklahoma, at the age of 79 years. She completed her secondary education in Shawnee, Oklahoma, and graduated with the Shawnee High School Class of 1961. She continued her education at Oklahoma Baptist University in Shawnee where she earned her Bachelors Degree in education. She completed her education at Texas Woman’s University in Denton, Texas. Margaret taught in the public school systems from 1960 until her retirement in 1992. The majority of her time teaching was spent in Texas, as well as time spent in Mississippi and Oklahoma. She coached multiple boys and girls’ sports including basketball, track and field, cross country, volleyball, tennis, golf, and swimming. She was very analytical and used sports to teach life lessons. In her pastime she enjoyed playing tennis, golfing, horseback riding, and raising animals on the farm. Those she leaves behind who hold many cherished memories include: Brother; Jim Newberry, of Templeton, California Sister; Cynthia Newberry, of Jacksonville, Florida Extended family; Phil Stevens, Lisa Stevens-Compton, (Goddaughter), and husband Jerry Audrey Cockrell Linda VanMeter Jarrod Compton and wife Kelley Jillian Bolding and husband David Greg Stevens and wife Stacye Mark Stevens and wife Khristin Debra (Groves) Dannefelser And a host of other relatives and friends. She was preceded in death by her parents, and two sisters, Donna Groves and Joan Stevens. Graveside service and interment will be held 11:00 a.m. Thursday, August 23, 2018, at Resthaven Memorial Park in Shawnee, Oklahoma. The family requests memorial contributions be to the American Cancer Society, 4110 South 100th East Avenue, Suite #101, Tulsa, Oklahoma, 74146. Arrangements and services were entrusted to Mowery Funeral Service of Owasso. www.moweryfs.com

Margaret Jo Newberry was born May 22, 1939, in Durant, Oklahoma, to B.C. and Louellen Moore Newberry. She died Friday, August 17, 2018, in Owasso, Oklahoma, at the age of 79 years. She completed her secondary education in Shawnee, Oklahoma,... View Obituary & Service Information

The family of Margaret Jo Newberry created this Life Tributes page to make it easy to share your memories.

Send flowers to the Newberry family.