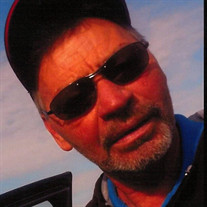 Mark Wayne Jones was born December 24, 1959, in Muncie, Indiana, to Donald Eugene and Frances Mary Shoemaker Jones. He died Sunday, November 24, 2019, in Tulsa, Oklahoma, at the age of 59 years. Mark was a veteran of the armed forces having served his country honorably with the United States Air Force. He worked several jobs but in recent years was a service manager with Bob Hurley RV. He was married December 16, 2009, in Claremore, Oklahoma, to Jeanna Morris. Mark enjoyed a variety of pastimes including remote control airplanes and cars. He also enjoyed coin collecting and building model cars. He loved watching college football and was an avid fan of the Arkansas Razorbacks. Most important was spending time with his family, having sleepovers and popcorn with the grandkids. On the spur of the moment he might turn off all the phones, load the car, and run off to Arkansas for the day. Those he leaves behind who hold many cherished memories include: His wife; Jeanna Parents; Larry and Frances (Tudy) Maier, of Owasso Sister and brother-in-law; Cathy and Randy Glenn, of Sand Springs, Oklahoma Brother and sister-in-law; Eric and Tia Jones, of Sapulpa, Oklahoma Brother; Todd Jones, of Stigler, Oklahoma Children; David and (wife) Kimberly Jones and four grandchildren, of (military Italy) David and Debbie Handley and one granddaughter, of Okmulgee, Oklahoma Christopher Jones, of California Elizabeth and Mark Mace and three grandchildren, of Longview, Oklahoma Jennifer Handley Jones, Gavin Trentham, Tyler Jones, Cody Jones Kayla and Melvin Sims and five grandchildren, of Claremore, Oklahoma Ashley Sims and three grandchildren, of Okmulgee, Oklahoma Michelle Ryall Brandon and Micheal Ryall Along with many more that he claimed as his children and grandchildren and an overflowing handful of nieces and nephews. The family will host a public visitation from 4:00 p.m. to 8:00 p.m. Monday, December 2, 2019, at Mowery Funeral Service in Owasso. Funeral honors by the United States Air Force will be presented at 5:00. Arrangements and services were entrusted to Mowery Funeral Service of Owasso. www,moweryfs.com

Mark Wayne Jones was born December 24, 1959, in Muncie, Indiana, to Donald Eugene and Frances Mary Shoemaker Jones. He died Sunday, November 24, 2019, in Tulsa, Oklahoma, at the age of 59 years. Mark was a veteran of the armed forces having... View Obituary & Service Information

The family of Mark Wayne Jones created this Life Tributes page to make it easy to share your memories.