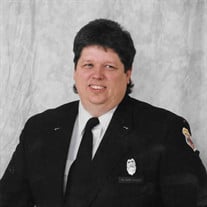 On December 12, 2018, Mark C. Mauldin, also fondly known by friends as “Pepsi” or “Frog”, unexpectedly walked on from this world – actually, according to the news some would dare say he ran on out of here. As he did many times during his lifetime, he made his last “run”, driving his beloved black truck and making quite the infamous exit – of course, we all knew that he was never one to go silently. An early indication of the latter would probably been not only his profession of choice as a Firefighter, but also his affinity for fireworks – particularly roman candles – and the sheer determination he had for creating a ruckus no matter the consequence. Many would think that fireworks and firemen are mutually exclusive matters, but that Venn diagram is dang near a perfect circle and Mark was no exception. Come to think of it, there were probably many indications that his exit from this life was going to be one for the books (or again, the news). Born on April 11, 1957 to the famed Choctaw Master Artist, Carol “Jane” McCarty Mauldin, and Bob “Corwin” Mauldin, Mark grew up on the Northside of Tulsa as the oldest of four. His greatest passion, cars, trucks, trains and anything merely having to do with the word “racing”, started at an early age, whereby he would oftentimes eat his morning toast in a certain way just to make a shape resembling a race car. If it had wheels, he was all about it. In the 70’s he attended Will Rogers High School in Tulsa (Class of ’75) and tore up the streets in one of his many rat rods – the orange Nova, ‘64 Plymouth Sport Fury or the ’65 SS Impala. The thrill of gear-turning, engine-borne speed continued to cast an indelible influence on his personal life and his professional trajectory of becoming a career Firefighter. Mark was hired onto Tulsa Fire Department in September 1980 at the age of 23. As he said it best, he, “Made it through all 29 years with very little physical injuries, been lucky more than once and thought I was dead at least 5 times that I know of. Never was scared even once about being killed or even injured while playing fireman.” He was a Trustee for Local 176, he had many different part time jobs and was always looking for that better opportunity, "hit the big lick, home run". Retired as Captain, he served at Station 23 District 5 "C" for 17 years and Station 27 "B" for 12 years; and he would always have it to be known that E-27 was the busiest firetruck in all of Oklahoma, with E-23 naturally being the second busiest fire company from far and wide. As a good friend said, Mark was a True "Engine Man" he could not let himself be associated with a Ladder for more than a temporary daily transfer, and at best barely tolerated those short assignments. Always remembered for his ornery quick wit and non-discriminatory insult policies, he was ever so proud and eager to systemically impart his infinite wisdom unto unsuspecting rooks. Nonetheless, all of that lively insight, or whatever story he was telling, was forever served up with his own brand of humor and a smile that always reached his eyes. Married in August 1985 to “the prettiest girl he had ever seen”, Mark and Sondra (Ala) have been together for 33 years and have four equally ornery kids and two beautiful grandchildren to show for it. It was well known that he indeed loved his very own bunch of goofballs - his family - which he would proudly showcase for all to see and hear all about. Mark is survived by his wife, who was ever patient with his routine antics, nail-biting and overzealous habit of collecting vintage toys (or everything really). He is also survived by his children Marlana (Mauldin) and Chris Mafille of Owasso, OK, Jack Mauldin of Owasso, OK, Kaitlyn Mauldin of Tulsa, OK and Zoe Mauldin of Owasso, OK; his siblings, Lisa Mauldin of Tulsa, OK, Jerry Mauldin of Tulsa, OK, and Steven Mauldin of Chicago, IL; and his ever-cherished grandbabies, Meira and Leon. He is preceded in death by his parents, and well, his prized black Dodge Viper Truck. To anyone that knew Mark, you were instantly within his circle of friends from the moment he likely struck up a conversation with you - wherever it may have been – Walmart, work, Quiktrip, online HotWheel forums, TFD or through one of his many colorful Facebook posts underscoring his usual “Mauldinisms”. Always proud of his Choctaw heritage, one of the last things he posted about was that “the warrior spirit never dies”! So as many say, Mark may be gone, but he is most definitely not forgotten. As it is spoken in Choctaw, E chi hvllo billiashke (“we will love you forever”). “I spent 29 years riding the busiest trucks in the state, learned from the best and hope that I ended passing my attitude and skill along to my men. Every time I smell smoke or see a fire truck running hard, it takes me back.” – Captain Mark C. Mauldin Memorial Service will be held 3:00 p.m. Friday, December 21, 2018 at the Mowery Funeral Service Chapel in Owasso with Stan May officiating. In lieu of flowers the family requests memorial donations be made in Mark’s memory to the Mark Mauldin Memorial Fund on www.GoFundMe.com. Arrangements and services were entrusted to Mowery Funeral Service of Owasso. www.moweryfs.com

The family of Mark C. Mauldin created this Life Tributes page to make it easy to share your memories.

Send flowers to the Mauldin family.