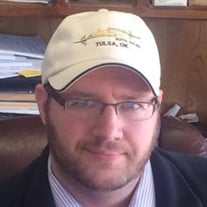 Mark Allen Smith was born on December 5, 1980, in Tulsa, Oklahoma, to Robert Clinton Smith and Melinda Gale (Dorsey) Smith. He died on Thursday, October 8, 2020, in Tulsa, Oklahoma, at the age of 39 years. Mark was raised and educated in Owasso, Oklahoma where he attended Owasso High School. He spent most of his working life as a car salesman with various dealerships around the Tulsa area. Mark grew up going to church at Owasso First Assembly of God, but had most recently been attending Foundations Church in Tulsa. He loved to tell stories and his favorite is to talk about the time he “hung out” with Garth Brooks. In his spare time Mark enjoyed a variety of past times such as watching the St. Louis Cardinals, playing poker, and arm wrestling in tournaments, but most of all he loved his family and spending time with them. Those he leaves behind who hold many cherished memories include: Mother; Melinda Smith, of Owasso Brother; Bryan Smith and wife Amber, of Jenks Grandparents; Don Dorsey and wife Norma, of Claremore Numerous Nieces and Nephews Aunt; Norann Miller, of Little Rock, Arkansas Uncle; Kendall Dorsey and wife Cheryl, of Claremore He was preceded in death by grandma, Vanteen, and father, Robert. Visitation will be held 2:00 p.m. to 5:00 p.m. on Sunday, October 18, 2020 at Mowery Funeral Service in Owasso. Funeral Service will be held 10:00 a.m. on Monday, October 19, 2020 at the Mowery Funeral Service Chapel with Pastor Kevin Norwood officiating. In lieu of flowers the family requests donations be made in Mark’s memory to Tulsa Pop Kids, 6927 S. 115th E. Ave, Broken Arrow, OK 74012. Arrangements and services were entrusted to Mowery Funeral Service.

The family of Mark Allen Smith created this Life Tributes page to make it easy to share your memories.