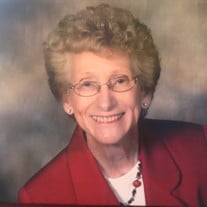 Mary Lucille Combs Coates was born June 16, 1931 in Tulsa, Oklahoma. Lucille left her earthly home to receive her home in glory on August 26, 2021. Before moving to Owasso, Oklahoma in 1939, as a child Lucille lived in Tulsa, Oklahoma; Nashville, Tennessee; Evansville Indiana and Dawson, Oklahoma. She has cherished her memories of her days in Owasso. Many life-long friends were made in the first year she lived in Owasso and has continued throughout the years. Lucille lived in Owasso from the age of 8 until she married. She had fond memories of going to the Komma grocery store to pick up items. Her sister Annie and she would play paper dolls for hours. Her father GB Combs was a prominent figure in the Owasso community as the Postmaster. Lucille graduated from Owasso High School in 1950. After graduation she studied bookkeeping and worked for Cooper Plumbing Supply. While working she meet a young man who she dated a few times. He needed a ride to Owasso to see her and asked her future husband to take him. The young man left town for a job so a few weeks later, Bob called Lucille for a date. They went to the Johnny Lee Wills rodeo. This was her first introduction to what her future would hold. In the Fall of 1952, Bobby Joe Coates asked her to marry him. They were married 2 weeks later, on November 1, 1952. Lucille continued to work until the birth of her first child in 1953. The young couple made their first home in Tulsa where they lived until moving back to Owasso in 1965. She and her husband were involved with the Round Up Club in Sand Springs and Owasso. In later years, they belonged to several wagon clubs and attended many trail rides in NE and SE Oklahoma, SW Missouri, SE Kansas, and NW Arkansas, making many friends all along the way. Lucille started attending First Christian Church in Owasso as a young child and was baptized as a teenager. She continued to attend until her marriage. She and her new husband attended Osage Hills Christian Church in Tulsa where they were involved with many activities including teaching Sunday School. Later, when they moved to Owasso, they placed their membership at Collinsville Christian Church where she continued her work in the church. Lucille loved throwing parties for her children’s Sunday School classes. Over the years many have partaken of the communion bread she prepared in her kitchen. In 1992, Bob and Lucille started attending First Christian Church in Owasso where her work for the kingdom continued. Whenever she saw a need she tried to fill it. Lucille greeted people at the door most Sundays for many years and loved visiting those who were home-bound. She helped in the kitchen with the meal preparation on Wednesday nights. Singing and listening to hymns have helped bring joy and comfort to her throughout the years. Lucille loved being a daughter, wife, mother and grandmother. She provided a healthy meal each day with produce from the garden. Each summer, she preserved tomatoes, green beans, corn, and apples. She made the best homemade applesauce and dilly beans. Each Thanksgiving she made all of her family’s favorite pies. She loved Christmas and decorating for the holidays. The tree was decorated with ornaments that represented events in their lives. Every Christmas was a big event. Lots of good food and wonderful memories were made. She made divinity, decorated sugar cookies and loved handing them out to many during the holidays. Lucille was very creative decorating her house with her creations. Many pictures that adorned her walls were painted by Lucille. She crocheted many doilies, afghans, and various other items. She would say that she was not talented, but her pieces of art are a testimony otherwise. Lucille enjoyed making her children and herself many of their clothes. Pets were a huge part of Lucille’s life. Each one held a special place in her heart. She is predeceased by her parents GB Combs and Elizabeth Rebecca Miller Combs. 11 brothers and sisters Gladys (Orville) Combs Sheline, Thelma Combs Thomas, Jim Combs, Gerald (Maxine) Combs, Billy (Ruby) Combs, Lois (Harold) Combs Davis, Doris Combs Goodwin, Bettie (Claude) Combs Bass, Gene (Louella) Combs, Glen (Norma) Combs, Annie (Bob) Combs Cage, her husband Bobby Joe Coates and son Stephen Charles Coates. She is survived by her daughter Dana Coates West (husband Jim), Sons, William "Bill" Coates (wife Janice), Robert "Bob" Coates (wife Rachael), daughter in-law Karen "Lynia" Coates, brother-in-law Bob Cage, 6 grandchildren, and 14 great grandchildren. Visitation will be held from 4:00 p.m. to 8:00 p.m. Monday, August 30, 2021, at Mowery Funeral Service in Owasso. Funeral service will be held 10:00 a.m. Tuesday, August 31, 2021 at First Church in Owasso, Oklahoma, with Pastor Matt Thomason officiating. Final resting place will be at Fairview Cemetery in Owasso, Oklahoma. The family request instead of flowers a donation to Cookson Hills Christian Home, 60416 Highway 10, Kansas, Oklahoma 74347, 918.948.6300. https://cooksonhills.org Arrangements and services were entrusted to Mowery Funeral Service of Owasso. www.moweryfs.com

Mary Lucille Combs Coates was born June 16, 1931 in Tulsa, Oklahoma. Lucille left her earthly home to receive her home in glory on August 26, 2021. Before moving to Owasso, Oklahoma in 1939, as a child Lucille lived in Tulsa, Oklahoma; Nashville,... View Obituary & Service Information

The family of Mary "Lucille" Coates created this Life Tributes page to make it easy to share your memories.

Send flowers to the Coates family.