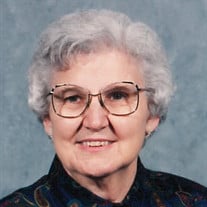 Mary Jean Hulsey was born September 7, 1926, in New Albany, Mississippi, to William Otto and Edna Olivia Johnson Doom. She died Thursday, April 4, 2019, in Tulsa, Oklahoma, at the age of 92 years. Jean was reared and educated in New Albany and graduated with the New Albany High School Class of 1944. She was an outstanding athlete for the Lady Bulldogs basketball state championship team and was selected as an All State basketball player. At the age of 11, Jean was saved and baptized at the New Albany Baptist Church. After graduation, she continued her education at Northeastern Oklahoma A & M in Miami, Oklahoma, earning her Associates Degree in December of 1981. She was a faithful member of the Miami First Baptist Church where she worked in the Adult Sunday School Department as Outreach Leader and Assistant Director for over 24 years. She also served as a member of the Women’s Missionary Union as an officer. Jean also volunteered with the Ladies Auxiliary with Miami Integris Hospital as a worker and officer logging more that 8,000 hours over a 40-year period. She was also a member of the 20th Century Club. Jean traveled all over the country, and the world for that matter, and was never afraid of an adventure even in her senior years. She enjoyed many things throughout her life, but especially her role as Grandma to her grandchildren. Those she leaves behind who hold many cherished memories include: Two sons; William H. Hulsey, Jr., and wife Karen, of Portland, Texas Barry J. Hulsey, and wife Kim, of Owasso, Oklahoma Grandchildren; Shannon Smith and husband Scott Sean Hulsey and wife Deborah Laura Douthit and husband William Matthew Hulsey and wife Molly Great grandchildren; Samuel Hulsey, Amelia Douthit, Rosemarie Smith, Solomon Hulsey Lillian Smith, Meredith Douthit, and Evangeline Hulsey Brother-in-law; Glen Hulsey She was preceded in death by her parents, her husband of over 51 years, William, one brother, and two sisters. Funeral service will be held 10:00 a.m. Saturday, April 6, 2019, at the Mowery Funeral Service Chapel in Owasso. Graveside funeral service is pending and will be held at the Vista Memorial Cemetery in New Albany, Mississippi. The family requests memorial contributions be made to the Owasso Baptist Home for Children, 12700 East 76th Street North, Owasso, Oklahoma. Arrangements and services were entrusted to Mowery Funeral Service of Owasso. www.moweryfs.com

The family of Mary Jean Hulsey created this Life Tributes page to make it easy to share your memories.

Send flowers to the Hulsey family.