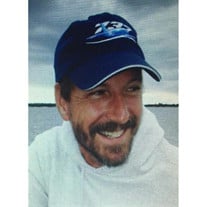 ' Matt Richard Davis was born September 10, 1957, in Zanesville, Ohio, to Richard DeWitt and Barbara (Lehman) Davis. He died Thursday, May 19, 2016, in Claremore, Oklahoma, at the age of 58 years. Matt was reared and educated in Zanesville, Ohio, and graduated with the Zanesville High School Class of 1976. He was a veteran of the armed forces having served his country honorably with the United States Navy. He completed his education attending Embry Riddle Aeronautical University. Matt was married March 21, 1992, in Tulsa, Oklahoma, to Linda Sullivan. He spent most of his working life as an airline mechanic with American Airlines in Tulsa. He enjoyed a wide variety of pastimes including fishing and raising Bob White quail. He also enjoyed flying radio controlled airplanes and was in the process of building a full size airplane. He recently became interested in beekeeping and was a member of the Northeastern Oklahoma Beekeepers Association.Loving family members include:His wife; Linda, of the homeSon; Austin Davis, of Summerville, South CarolinaThree daughters; Brandy French, of Tulsa, Oklahoma Lindsay Davis, of Zanesville, Ohio Sarah Newell, of Ladson, South CarolinaTwo grandsons; Aidan Davis and Jack FrenchSister; Susan Anderson and husband Doug, of Columbus, OhioBrother; Dean Davis and wife Corrina, of Zanesville, OhioParents; Richard and Barbara Davis, of Zanesville, OhioHe was preceded in death by a son, Matthew French. Memorial service will be held 4:00 p.m. Friday, June 3, 2016, at the Mowery Funeral Service Chapel in Owasso with Pastor Leonard Pirtle officiating. Private family disposition will be held at a later date in Zanesville, Ohio. Arrangements and services for Oklahoma were entrusted to Mowery Funeral Service of Owasso.www.moweryfs.com'

' Matt Richard Davis was born September 10, 1957, in Zanesville, Ohio, to Richard DeWitt and Barbara (Lehman) Davis. He died Thursday, May 19, 2016, in Claremore, Oklahoma, at the age of 58 years. Matt was reared and educated in Zanesville,... View Obituary & Service Information

The family of Matt Richard Davis created this Life Tributes page to make it easy to share your memories.

Send flowers to the Davis family.