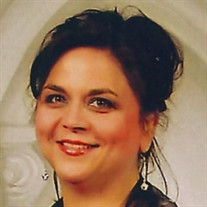 Melody Dawn Edmondson Black was born April 6, 1969, in Nuremberg, West Germany, to Grady Neal Edmondson and Peggy Joanne Hudson Edmondson. She died Thursday, January 20, 2022, in Tulsa, Oklahoma, at the age of 52 years. Melody completed her secondary education in Sand Springs, Oklahoma, where she played flute and piccolo in the Charles Page High School and graduated with the Class of 1987. She continued her education at the University of Oklahoma where she earned her bachelor’s degree in marketing in 1991. Melody was proud to be a member of the Pride of Oklahoma Marching Band playing the flute and piccolo. She was also a member of the Pride of Oklahoma Marching Band Alumni and looked forward to going back and playing with the alumni band. Melody was married August 1, 1991, in Cleveland, Oklahoma, to Kenneth Black. They had made their home in Owasso, Oklahoma, since 2000. Melody spent most of her working life with American Airlines as a facilities coordinator. She was active with the American Red Cross giving 117 pints of blood over the course of many years. She would coordinate blood drives within the campus of American Airlines and was recognized as being one of the largest drives in the area. Melody could often be seen encouraging others to give while wearing the "Buddy the Bloodhound" suit during blood drives. Melody enjoyed a variety of pastimes including earlier in adulthood working as a model. She always looked forward to the holidays and spent countless hours decorating her home. She enjoyed having lava lamps and collecting Rustic Cuffs. She was also a strong woman of faith and was a member of the Anglican Church of St. Paul in Owasso where she enjoyed playing flute during services. Melody was a member of the following organizations • National Society Daughters of the American Revolution - Organization Regent Owasso Chapter • National Society Daughters of the American Colonists, Col. John Alston Chapter • National Society Colonial Dames XVII Century, John Plumb Chapter • Descendants of Early Postmasters 1607 to 1900 • First Families of the Twin Territories • Zeta Tau Alpha Sorority • Tau Beta Sigma Band Sorority Those she leaves behind who hold many cherished memories include her husband Kenneth and her son Seth Black, of the home, and her parents, Grady and Peggy Edmondson, of Sand Springs, Oklahoma, as well as many aunts, uncles, cousins, and friends. Visitation will be held from 4:00 p.m. to 8:00 p.m. Tuesday, January 25, 2022, at Mowery Funeral Service of Owasso. Funeral service will be held 10:00 a.m. Wednesday, January 26, 2022, at Bethel Baptist Church in Owasso with Father Chris Waters and Pastor Lee Herring officiating. Committal service and interment will follow at Fairview Cemetery in Talala, Oklahoma. Arrangements and services were entrusted to Mowery Funeral Service of Owasso. www.moweryfs.com . Donations made in memory of Melody Edmondson Black, Class of 1991 to Pride of Oklahoma Marching Band, 500 West Boyd, Norman, OK 73019.

The family of Melody Dawn Black created this Life Tributes page to make it easy to share your memories.

Send flowers to the Black family.