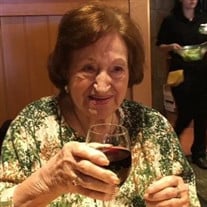 Filomena “Mena” Snow was born October 18, 1925 in Naples, Italy to Michelangelo Oliviero and Anna Montagna. She passed from this life on Wednesday, February 6, 2019 in Owasso, Oklahoma at the age of 93 years. Mena was raised and educated in Naples and graduated high school there. She was a war bride, marrying Frank Blazitus, October 14, 1945. She made the move from Naples to the United States on June 6, 1946. After Frank's death, Mena remarried in Arlington, Virginia on April 14, 1977 to Jerry Snow. She spent most of her working life as a hostess for various restaurants and cruise lines. Mena moved to Owasso, Oklahoma in 1983 and was a faithful parishioner at St. Henry Catholic Church in Owasso for about 20 years. She belonged to the Owasso Senior Citizens group and the Tulsa YWCA. She was fluent in 5 languages and enjoyed a variety of pastimes such as crocheting, ceramics, crossword puzzles, and cooking, especially Italian meals. Those she leaves behind that hold many cherished memories include: Daughter; Ann Marie Loveless and husband Charles, of Owasso Two Grandchildren; Marylynn Gragg and husband John, of Wichita, Kansas John Krisulevicz and wife Karen, of Broken Arrow Three Great Grandchildren; Kaitlyn Krisulevicz Koltin Krisulevicz Karli Krisulevicz 2 Step Grandchildren Michael Loveless Jana Mahoney One Sister, Maria One brother, Carlo. Numerous Nieces and Nephews in Italy. She was preceded in death by her parents, Michelangelo and Anna, husbands, Frank and Jerry, 6 brothers, Salvatore, Pietro, Mario, Vittorio, Aldo and Giovanni, and 3 sisters, Bianca, Angela, and Elena. Memorial Service will be held 10:00 a.m. Friday, February 15, 2019 at St. Henry Catholic Church in Owasso with Father Matt LaChance officiating. Arrangements and service were entrusted to Mowery Funeral Service.

Filomena &#8220;Mena&#8221; Snow was born October 18, 1925 in Naples, Italy to Michelangelo Oliviero and Anna Montagna. She passed from this life on Wednesday, February 6, 2019 in Owasso, Oklahoma at the age of 93 years. Mena was raised and... View Obituary & Service Information

The family of Mena Snow created this Life Tributes page to make it easy to share your memories.

Send flowers to the Snow family.