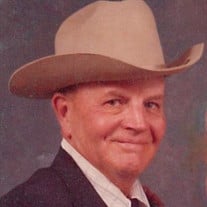 Merle DeWitt Lewis was born July 27, 1929, in Peggs, Oklahoma, to John Harrison Lewis and Ellender Marie (Deardeuff) Lewis. He died Thursday, October 31, 2019, in Tulsa, Oklahoma, at the age of 90 years. Merle was raised and educated in Porter, Oklahoma where he completed the 10th grade before convincing his mother to join the United States Army, where he served his country honorably as an aircraft mechanic. While in the Army he earned his GED and received the WWII Victory Medal and the Army of Occupation Medal. In 1967, he was a civilian aircraft mechanic in Bien Hoa, Vietnam. He was married on June 8, 1949 in Muskogee, Oklahoma to Dorothy Louise (Estes) Lewis. Merle attended Spartan School of Aeronautics and worked various jobs for McDonnell Douglas for most of his life. He was an ordained Free Will Baptist minister and attended Rejoice Church in Owasso for many years. Merle was also a member of the Masonic Lodge. He enjoyed a variety of past times such as playing the guitar, traveling, and farming. Those family members he leaves behind who hold many cherished memories include: Daughter; Janet Bryant and husband Wayne, of Sherwood, Arkansas Brenda Sanders, of Sperry 4 Grandchildren; Michael Walker and wife Vikki, of Owasso Elizabeth O’Brien and husband Barry, of McKinney, Texas David Walker Jacinda Summers and husband Ryan, of Sherwood, Arkansas 5 Great Grandchildren; Riley Walker, of Owasso Kaitlyn O’Brien, of McKinney, Texas Madison Walker, of Owasso Kayley O’Brien, of McKinney, Texas Meghan Summers, of Sherwood, Arkansas He was preceded in death by his father, John, mother Marie, 2 brothers, Earl and Beecher, sister, Vesta, his wife of 69 years and 9 months, Dorothy and son in law, Steve. Visitation will be held from 5:00 p.m. to 7:00 p.m. Tuesday, November 5, 2019, at Mowery Funeral Service in Owasso. Funeral service will be held 11:00 a.m. Wednesday, November 6, 2019, at the Mowery Funeral Service Chapel in Owasso with Pastor Leonard Pirtle officiating. Graveside and committal service will be held at Rose Hill Cemetery in Tulsa. Arrangements and services were entrusted to Mowery Funeral Service of Owasso. www.moweryfs.com

The family of Merle DeWitt Lewis created this Life Tributes page to make it easy to share your memories.

Send flowers to the Lewis family.